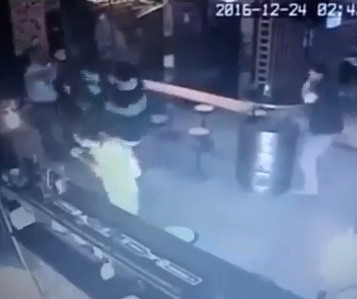 TBILISI, DFWatch–A new video of a public auditor pointing a pistol in a bar last December further undermined his claim that a recent fight with an ex-prosecutor was corruption related.

The video surfaced on the Internet on Wednesday, and shows state auditor Lasha Tordia pointing a pistol at staff of a night club, allegedly to make them turn up the music.

The video appears to be filmed by surveillance cameras at P.A.M. Club on Paliashvili Street and bears the time stamp 02:43 (am) and the date appears to be December 24, 2016.

Tordia, who heads the State Audit Office, previously claimed that he was attacked at a bar nearly two weeks ago because a former chief prosecutor was upset about a corruption investigation his office has been conducting.

But the new video, surfacing first on Facebook, seemed to undermine his image. Though he did not deny the video’s authenticity, he said that had been waiting for something like this. He accused the Ministry of Internal Affairs (MIA) and the Prosecutor’s Office (POG) of circulating the footage on orders from Otar Partskhaladze, the ex-Chief Prosecutor which was involved in a bar fight with Tordia May 13.

The verbal and physical confrontation between Tordia and Partskhaladze took place at the bar El Centro, near Freedom Square. Both blame each other of having provoked the conflict.

After the fight Tordia was taken to hospital, where he stayed for a couple of days diagnosed with a head concussion. After some hesitation, he divulged that he thinks the fight had relation to a probe his office has been conducting which established that Partskhaladze amassed millions of laris through suspicious deals with Tbilisi City Hall; a case which he thinks ought to be referred to the Prosecutor General’s Office for further investigation.

Recently, the MIA published a video showing that brawl, which was assumed as an attempt to whitewash Otar Partskhaladze who seemingly enjoys an informal sway over the two law enforcement bodies, MIA and POG.

The MIA also commented on the video from P.A.M. Club in a statement.

“Owning to the high public interest, the Ministry of Internal Affairs would like to clarify that on December 24, 2016, an investigation was launched by Vake-Saburtalo police division of Tbilisi Police Department into the fact of threat, a crime envisaged by article 151 of the Criminal Code. The investigation is based on the report of citizen D.G., who is an employee of P.A.M. Club situated on Paliashvili Street.

“According to the report, D.G. was threatened in the bar by an unknown person with a firearm.”

“Soon after, an investigation was launched, employees of the bar – D.G. (questioned on December 24, 2016) and witnesses L.A and J.D. (interrogated on December 26, 2016) – stated that they were attacked by an unknown person and threatened and pointed at with  a firearm. They also stated that the unknown person demanded to turn the music up in the bar.

“Within the frames of the investigation, on December 26, 2016, the manager of the bar – T.B. – submitted video footage recorded by surveillance cameras depicting the events that took place two days earlier. After studying the material, the footage was added to the evidence attached to the criminal case.

“At this stage all necessary investigative activities are being carried out including facial analysis and audio forensic examination in order to define the authenticity of the video footage. Further results of the investigation will be made public.”

“The investigation regarding the mentioned case is in progress under article 15 [of the Criminal Code], envisaging a term of imprisonment of up to one year,” the statement says.