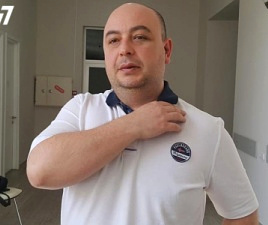 TBILISI, DFWatch–The head of Georgia’s State Audit Office claims an investigation into a land plot scheme was the reason he was physically assaulted by a former chief prosecutor and his associates at a bar in Tbilisi Friday night.

General Auditor Lasha Tordia (37) said he was attacked at El Centro, a bar near Freedom Square in the center of the capital, by former Chief Prosecutor Otar Partskhaladze.

“This person has a feeling of complete impunity, because in this club there were so many people and everything happened in front of them,” Tordia told the television station Rustavi 2.

The former top prosecutor was accompanied by three or four men and they also took part in the assault, he continued.

Rustavi 2 interviewed the head of the State Audit Office at the hospital, where staff confirmed that Tordia had a brain concussion. However, the staff at El Centro denied that there had been a fight at their bar Friday night.

The general auditor claimed the attack had connection to an investigation the State Audit Office has almost concluded about the illicit distribution of land plots during Partskhaladze’s tenure.

Tordia said the official results of the probe will be released on Monday.

Otar Partskhaladze (41) who was appointed chief prosecutor soon after Georgian Dream won the parliamentary elections in 2012 and served until January 2014, has not yet commented.

The Ministry of Internal Affairs said it has launched a probe into the case.