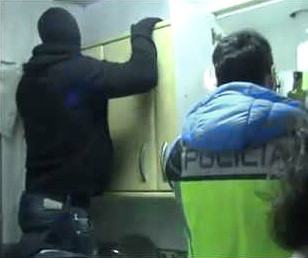 TBILISI, DFWatch–Spanish police have arrested dozens of Georgian nationals suspected of home burglaries in an elaborate operation said to be targeting ‘the Georgian mafia’.

The police released information on Thursday but operations were carried out earlier, in February.

Altogether, police detained 48 people in several simultaneous raids in Madrid, Barcelona and other cities, most of them Georgians with extensive criminal records.

Police searched their apartments and found stolen jewelry and tools suspected to have been used for the robberies.

The robberies were carried out in 2016 and 2017, mostly in Madrid and Murcia.

All the recovered items are currently on exhibit in the main police headquarters in Madrid. This month, any citizen who has been a victim of robbery may visit the exhibition to recover his or her stolen items.

The operation was carried out in cooperation with Georgian police, Ministry of Internal Affairs of Georgia told Interpressnews news agency.

A suspected Georgian mafia boss and 35 others were arrested in Spain in July, 2015.