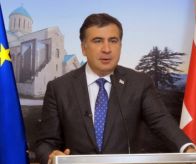 TBILISI, DFWatch–President Mikheil Saakashvili has asked the Ivanishvili government for a dialogue to discuss how to establish ‘civil peace’ after the dismantling of a minaret, but the government rejected the idea, and the vice premier said there have never been religious confrontation in Georgia.

Energy Minister Kakhi Kaladze, who is also Vice Prime Minister, posted a rejection of the proposal on his Facebook page on Tuesday after Saakashvili held a speech where he addressed the dismantling of a minaret in south of the country.

The government’s press office, however, told DF Watch that the government has so far not made any decision regarding the president’s proposal.

A minaret was dismantled in Adigeni on Monday, after claims that it had been illegally constructed. At first the government gave a different reason for dismantling; that there were custom tax violations while constructing it. Muslims protested against the dismantling, and 21 people were detained by police.

On Tuesday, President Saakashvili visited the spot where the minaret stood and said that these types of ‘provocations’ will worsen relations with Turkey and Azerbaijan.

“I call on the government to stop speaking by hate and revenge. I call on everyone to have dialogue with each other and work together to achieve civil peace,” he said adding that the provocation might worsen relations with Turkey and Azerbaijan and leaves Georgia face to face with Russia. “We remain unprotected,” he said.

Saakashvili also called on the government to have a clear policy and explain its own position in order to prevent such incidents in the future.

“Removing the minaret is for Muslims the same as removing a cross from a church for Christians,” he added.

“Any type of conflict which has religious grounds doesn’t reflect the common situation in the country, but are provocations of separate people or little groups,” he wrote.

Kaladze called on Orthodox Christians to remember Catholicos Patriarch’s call ‘to love each and everyone despite their religious views.’ He wrote that he thinks the president’s proposal is another PR move.