Gamgebeli detained in village where minaret was dismantled

Gamgebeli detained in village where minaret was dismantled 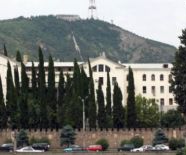 In Chela, where a minaret was recently taken down from the local mosque, the head of the local government has been detained. (Interpressnews.)

TBILISI, DFWatch–Police in Georgia on Tuesday detained the head of the local government in Adigeni in the south of the country, where a minaret of mosque was recently dismantled.

Gamgebeli Simon Parunashvili, who is member of the National Movement, is charged with exceeding his powers and negligence.

According to the investigative service at the Finance Ministry, there was a tender announced on May 5, 2011, in Adigeni municipality and Parunashvili was chairman of the tender commission.

The statement says that the gamgebeli ignored the law, abused his powers and chose a the company Adigeni 2009 Ltd, which belongs to one of the members of the tender commission. The company was announced as the winner of tender, which caused violation of state interest, the statement reads.

The investigative service also states that there was one more incident of the same type, when the municipality announced another tender on June 7, 2012. Parunashvili as head of the tender commission again abused his powers and chose Namkeri Ltd.

Anton Merabsihvili, chairman of the company, is said to have artificially increased costs and extent of the work in the contract.

“The commission announced this company as the winner, while it was obliged to disqualify Namkeri Ltd, which violated state interests,” the statement reads.

Parunashvili may be sentenced to up to three years in jail.

Zurab Chilingarashvili, MP for Adigeni, claimed that the real reason for the charges against Parunashvili is that he was the only remaining UNM gamgebeli.

“This way they attempted to cover up one incident with another,” he said, recalling the scandal of the dismantling of the minaret.

President Saakashvili during a visit to southern Georgia on Tuesday also saw the detention of the gamgebeli in connection with the minaret conflict and called on the government to ‘not put the coalition in an awkward situation’.

“What does it mean to detain the gamgebeli today when there is a center for civic tension today? According to my information, the gamgebeli of Adigeni refused to carry out the order to dismantle the minaret,” he said, adding that a few days after he was detained, “this is very awkward, but also huge disrespect to Georgian society.”