Protests resume against the Nenskra hydro power plant in Svaneti

Protests resume against the Nenskra hydro power plant in Svaneti 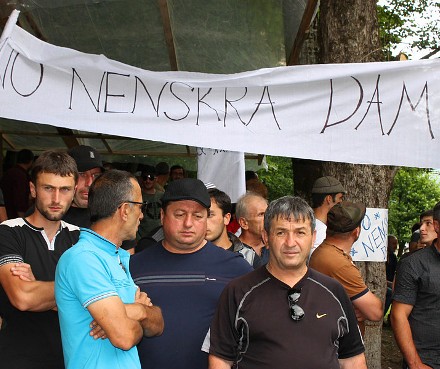 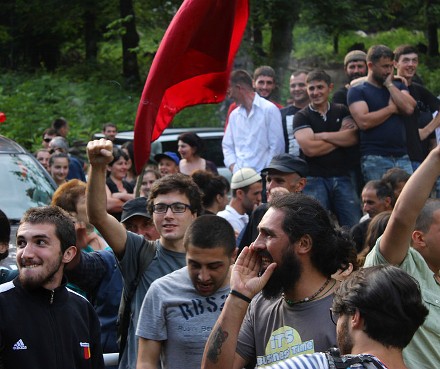 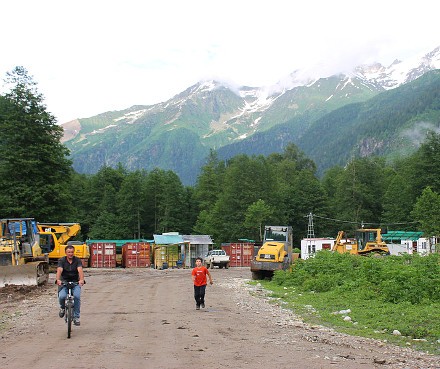 TBILISI, DFWatch–Up to two hundred locals and environmental activists gathered in Chuberi in Upper Svaneti on Sunday as the protests against the planned Nenskra hydro power plant resumed.

Activists argue that if built, the dam on the Nenskra river will deprive people of lands and forests that are vital to their livelihood and cause geological hazards which have not been taken into account in the official social and environmental impact assessment.

Locals from Chuberi, Khaishi, Nakra, Khevi and other villages that will be affected by the massive construction plans were joined by activists from the Tbilisi-based environmental groups Green Fist and Young Greens.

They demand that the construction project is halted until alternative projects and the consequences have been properly assessed in close cooperation with the local community.

A petition was signed, addressed to the main stakeholders in the project and advocacy groups, including the European Bank for Reconstruction and Development, the European Investment Bank, the Asian Development Bank, the prime minister and public defender of Georgia, and local and international NGOs.

The activists gave investors, including the construction company Salini Impregilo, one week to meet their demands, otherwise they will resume their blockade of the road leading to the construction site.

Father Giorgi Chartolani, a priest from Mestia who is an outspoken advocate for preserving the Svan language and culture, argued that such construction projects pose a threat to the social and cultural fabric of Svaneti, a region in the northwest of Georgia with its own language that is not officially recognized.

“The destruction of our language, culture, and traditions, which bear the identity of this region and the whole country will be a big blow to the spirituality of the Georgian nation. People involved in the construction project never stood up for Georgia. They are driven by profit and their vision of success,” Father Chartolani said.

After the demonstration in Chuberi, the activists went to the upper Nenskra valley to protest at the construction site for the power plant. Several activists clashed with police who tried to prevent them from entering the site.

Despite earlier reports, the pan-Svan congress called Lalkhor was not held this time. Zura Nizharadze, a resident of Khaishi, told DF Watch that Lalkhor is a time-consuming process that requires the consolidation of the whole of Svaneti with election of representatives first on the village level, and then on a regional level. The last Lalkhor was held in year 1865 and the memory of this traditional ruling body has lived on only thanks to Svan oral tradition.