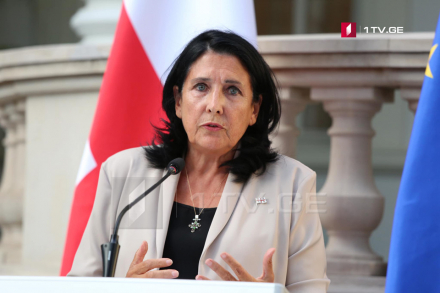 Despite a growing number of appeals, President Salome Zourabichvili has rejected the idea of pardoning Giorgi Rurua, an opposition activist and former paramilitary.

“I won’t pardon [him]. The Georgian society knows better than me everything about him and is aware why I will not make this decision. No one and nothing can influence me,” Salome Zourabichvili said Friday.

Many in Georgia and abroad had hoped that the president might pardon Rurua in the same vein as she did earlier in May with two other opposition politicians, ex-Mayor of Tbilisi Gigi Ugulava and former Minister of Defense Irakli Okruashvili.

The opposition insists the release of Giorgi Rurua was part of a deal struck with the Georgian Dream led government back in March after months of protest rallies, which the latter categorically denies.

“I remain concerned about today’s sentencing of Giorgi Rurua on spurious charges in Georgia – a legal system should never be used to fulfill political aims. President Zurabishvili should pardon Mr. Rurua in the interest of depolarizing the political climate as elections near,” U.S. Senate Foreign Relations Committee Chairman Jim Risch, R-Idaho, wrote on his twitter.

Andrius Kubilius, MEP and former Lithuanian PM, as well as several other American and European politicians, have also appealed to Zourabishvili with the same message.

Giorgi Rurua was arrested in November and sentenced to four years in prison Thursday for illegal possessing firearms. He pleads his innocence and considers the charges politically motivated, insisting the weapon was planted by the police.

Giorgi Rurua is one of the founders of the leading opposition-leaning TV channel Mtavari Arkhi and sponsored anti-governmental rallies on several occasions last year.

Despite wide support among almost the entire opposition, Rurua remains a highly controversial figure in Georgia due to his past membership in the dreaded paramilitary unit Mkhedrioni in the 1990s. Apart of this affiliation, he has also been associated with the organized paramilitary group “Evil Brotherhood” (or “Vere Brotherhood”) which was active in central Tbilisi in the 1990s. Both of these groups were associated with extrajudicial killings, marauding and bloody turf wars rampant throughout Georgia in 1990s.

Giorgi Rurua’s elder brother, Nika, served as a minister of culture during Mikheil Saakashvili reign in 2008-2012.