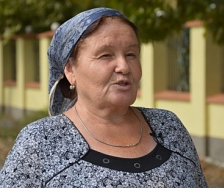 TBILISI, DFWatch–A small, male-dominated village in the northeast of Georgia has for the first time appointed a woman as a head of municipality.

Monday, Tamar Margoshvili, 55, took the post as gamgebeli in Duisi, a village in Pankisi Gorge, Georgia, on the border with Chechnya.

Pankisi and its central village Duisi is different in tradition and lifestyle from the rest of Georgia. The majority of the population here are Kists, an ethnic subgroup of Chechens, while others are refugees from the two Chechen wars. The vast majority are Muslims, and among them there are so-called traditional followers of Islam and those who are sometimes called Wahhabis.

In Vainakh culture, which still exists in the Gorge, there is an informal ruling body called the Council of Elders. Many people go to them to find justice, instead of contacting the police or the courts. Even when a court issues a ruling, the council will make its own determination of penalties or punishment. Other than that, the council tries to be a mediator between people and the government.

Women protested here a while ago, demanding to have their own Women’s Council, which got; an innovation within this tradition. The new council discusses underage marriage and other problems that affect women.

The men in Pankisi would often say that a place for women is at home with her family and that they have no business getting involved in decision-making.

But on Monday, Information Center of Kakheti reported that Margoshvili, as the first ever woman, took over the post as gamgebeli.

“Our traditions say women aren’t able to have such positions and people were against having a woman as a leader. I am no worse than any men. I took a fight and I’ve made it,” Ick.ge quotes her saying.

Margoshvili, who has worked as a teacher in school and kindergarten, added that she has passed several exams and has tried for the position as gamgebeli of Duisi several times. The post remained vacant for nine months, until she was approved.

She earlier turned down offers of lower level positions in the municipality.