Pankisi’s Council of Elders and what they do

Pankisi’s Council of Elders and what they do 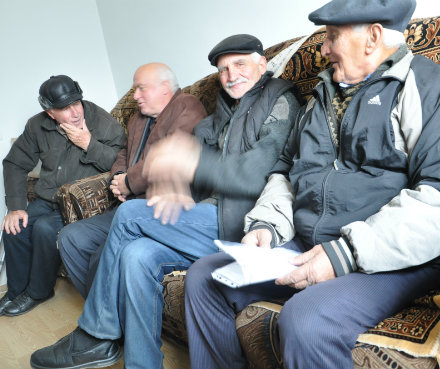 DUISI, DFWatch–Despite its reputation, Georgia’s Pankisi Gorge is now a quite peaceful place, according to the Council of Elders, an informal body which arbitrates conflicts in the area.

The council has a long history here. Its role is to mediate and decide on punishment after such disruptive events as murders, fights and family feuds.

Pankisi Gorge is mainly inhabited by ethnic Chechens and Kists, a subgroup of Chechens who are natives of Georgia. The valley has been the site of a lot of bad news in recent times. After two wars in neighboring Chechnya, more than six thousand Chechen refugees came to Georgia and most of them settled in this valley, but today only a few tens of families remain.

Pankisi was reported to be a jihadist base during the wars in Chechnya, and in 2002, it became the site of a U.S. military training program: the Georgia Train and Equip Program, which sought to root out extremism here as well as prepare Georgian soldiers for taking part in the war in Afghanistan.

Until 2005, Pankisi was known for its frequent kidnappings, robberies and drug dealing, until the government established its authority in the gorge.

In recent years there are many reports of youth from Pankisi Gorge going to Syria to fight while the name of Tarkhan Batirashvili, now known as Abu Omar Al-Shishani, ISIS commander, is also related to Pankisi, as DF Watch recently reported.

Members of the Council of Elders tell DF Watch that all these stories has influenced the impression people have of Pankisi – many people think it is dangerous to come here. They say in such a small place, there are not many opportunities for development, but tourism could be one way.

Zaur Gumashvili, head of the council board, says in most of the cities and towns in Georgia where there are transit roads, people live a better life, are making money, but Pankisi Gorge is a dead end in the east of Georgia.

“We are absolutely unemployed. There is one school, one ambulance and a kindergarten. The rest of the population is sitting at home doing nothing,” he says, adding that elderly people live their life from one pension slip to the next.

There are no industries in the valley. There used to be timber, but the trees have been cut down and nothing’s left of it. The only prospect would be development of tourism, but this requires investments. But council members think it’s an impediment to tourism development that Pankisi is always reported on as a ‘problematic region’.

“Everything’s is fine, but still there are reports as if here are some problems. Nobody wants to come,” they say, assuming that no-one cares about the place and no-one is paying attention, even though there is a potential.

Soltsa Kavtarashvili, head of the Council of Elders, says that Pankisi is a spot were the interests of great countries intersect, including the U.S., Europe, Russia, Turkey, the Middle East and the Arabic world.

“Of course it has an influence over this place.”

Members of the council remember when Prime Minister Irakli Garibashvili told them at a meeting a few weeks ago that the government is preparing a plan for the social and economic development of Pankisi and the implementation of the plan should start in 2015. But so far, not much is known about the plan.

Zaur Gumashvili recalls that there were several occasions in recent history when such kinds of plans were adopted. The fist time was in 1983, when he used to be the principal of the local school. That plan was only partly implemented.

The second plan was adopted in 1997, but not a single part of it was implemented, because of the difficult economic situation. Only 45, 000 laris was spent on reinforcing the river banks.

“Now they promise us a new plan. Let’s see what happens. Even if very little is done, it is for the better,” he said, remembering the words of ex-Prime Minister Bidzina Ivanishvili, who promised to pay more attention to the construction of factories.

“No steps have been taken so far, but we are waiting. They didn’t tell us any details about terms, but [said] the near future. We think it will start from 2015.”

“Currently, the date of publishing this concept is yet unknown. We think it will be no later than the end of the year.”

She said only after the concept is published will people learn what concrete steps will be taken to develop the regions.

The financing for the implementation of the concept is in the frames of the recent 30 million euros development package promised by the EU. The prime minister signed an agreement with EU representatives about the grant about a week ago during his visit to Brussels. The goal of the grant is the supporting Georgia’s regional development strategy and also supporting economic and social programs in the regions.

All the four representatives we spoke to agree that the situation in Pankisi was more or less better during Soviet times, because 90 percent of population was employed; however even then most of the people were employed outside of Pankisi.

“When we curse Russia today, 70 percent of people lived on the expense of Russia. There was a good income, citrus, tea, wine was exported there, people worked there, but now those roads are blocked and no-one will let us go to the U.S. or Europe. We can’t go to Russia and Europe doesn’t need us. A man cannot live counting on a beautiful nature,” Khaso Khangoshvili says. 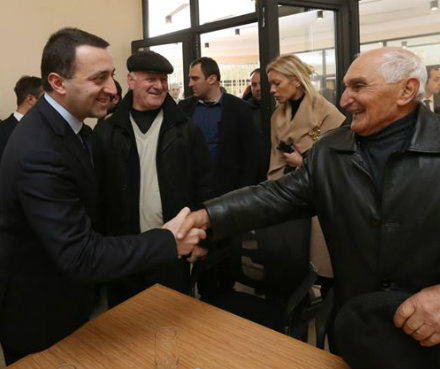 What the Elderly Council does

The council has 35 members who are elected by an annual assembly of people in Pankisi. The assembly also elects the head of the council, and the council then elects a board with nine members.

The council members say that the body has always existed in the gorge and always had the decisive word in processes taking place there. Even though the council doesn’t have any official recognition, they feel disappointed that they cannot get funds to implement certain projects, but instead ‘some people from Tbilisi and abroad’ come here to implement some projects in a place which they know nothing about.

“They organize some meetings and that’s it. That’s how they waste all that financing, which God knows where comes from and how it is spent.”

Council member Apolon Gaurgashvili says the most important function they have is to participate in the active processes in the community, which is regulating conflict situations, that have to do with way of life, weddings and funerals. All such things are regulated by the council.

“We have a separate law regulated by the council. This law is based on civic diplomacy and never contradicts the legislation, but on the contrary, reinforces it in the gorge.”

Who obeys the Council of Elders? On this question members answer that ‘a certain part’ follows them and they try to maintain these traditions, traditions as Vainakhs, which made these people different from the rest of the world.

The Council of Elders used to ‘observe its own saying’ every time, even during the Soviet Union.

If there was a fight or murder in the gorge, the court sentenced the perpetrator to prison and the man served the sentence.

“He is released from jail but he is not free. He starts from zero. He killed a man and he must be responsible,” Soltsa Kavtarashvili explains.

The Council of Elders gathers and there is a mediating court with oral legislation, which is passed on from the predecessors. The mediator judges know these laws and discuss the case with all the procedures, including questioning the witnesses. In the end they make a decision.

“Until the elders have made a decision, the conflict is not over.”

The most important thing in such mediation is to achieve reconciliation and establish peace. Almost every time, it ends peacefully.

“They obey us. If they don’t obey this decision, they will be separated from the community, lose respect,” Khaso Khangoshvili explains.

In the process of reconciliation between the family of the victim and the guilty person, a big part of the population may be involved together with the council members. Sometimes the guilty person is obliged to pay compensation, which varies according to how severe the crime was. It can be two cows for cutting a person’s finger or 70 cows for murder, which is only part of the punishment.

“This year we have peacefully solved confrontation between families in three cases where the families fought for 10 or even 13 years,” Zaur Gumashvili said.

If the death was an accident, in most of the cases the person who accidently killed another person attends the funeral after the reconciliation without paying compensation.

When asked about the Council of Women, a 15 member advisory body set up in recent years in the gorge, the Council of Elders members say that the women’s council will never be able to make decisions which contradict their decisions.

“They have their own functions and most of their activity is based on ‘women business.’ We deal with everything, every kind of problem.”