No solution in Tkibuli miners’ strike, government to send mediators

No solution in Tkibuli miners’ strike, government to send mediators 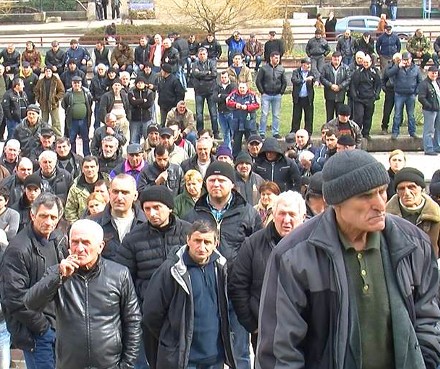 TBILISI, DFWatch–For more than ten days, miners have been on strike in Tkibuli, a town in western Georgia, demanding increased pay to compensate for their community’s loss of favorable tax conditions.

The Ministry of Labor and Health offers to get government mediators involved to try to reach an agreement between the workers and the management of Saknakhshiri GIG, the company which owns the coal mines.

“We are not demanding something luxurious. We are concerned with our everyday well-being, to save our families, our children and buy medicine,” Ruslan Butskhrikidze, one of the miners, said on Wednesday.

The miners say they will continue their protest until the company agrees to increase salaries.

On Wednesday, protesters gathered at the local municipality building and were joined by locals who showed their solidarity. The main demand is to increase salaries by 40 percent, but GIG Group is against this, claiming that the company will not be able to continue functioning. Management calls on the negotiations to continue in a peaceful environment.

Workers went on strike after Tkibuli was taken off a list the government keeps of so-called mountainous settlements. This means that the workers will not receive advantages offered to communities that are on the list, such as lower income tax. A new law defines mountainous settlements as those situated higher than 800 meters above sea level.

Wednesday, the Ministry of Labor and Health called on Saknakshiri GIG to negotiate with the workers and solve the problem.

Elza Jgerenaia, head of the Labor Department said ministry mediators are involved in the process. She said that there are examples of labor disputes being successful solved with the help of mediators and underlined that the Labor Code obliges workers and employees to negotiate.

“I want to call on both parties to negotiate and give us the opportunity to fulfill our duties, as it is our obligation to bring the parties closer and end the dispute through agreement,” she said.

During a government session on Wednesday, Prime Minister Giorgi Kvirikashvili asked about the progress of the ongoing strike in Tkibuli and was informed that a draft bill has been prepared to retain the advantages of mountainous settlement until the end of the year. The draft will soon be submitted to parliament.

Finance Minister Nodar Khaduri told him the draft prepared by the ministry will first of all concern mine workers. He didn’t specify other details.

Labor Minister Davit Sergeenko expressed hope that the parties will accept the help the ministry is offering and let mediators engage in the process in order to reach a negotiated settlement.