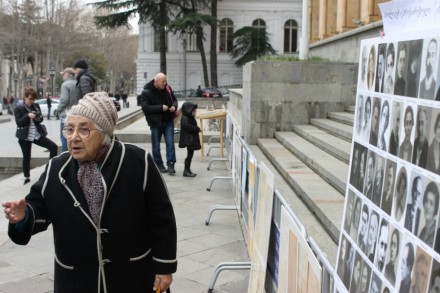 Tbilisi, DFWatch – Pictures and documents from the period of Bolshevik terror in Georgia marked the anniversary the tragic events of 1921.

A photo exhibition in front of the Parliament building in Tbilisi marked the Soviet Occupation Day, which is observed in Georgia annually on February 25.

The day commemorates the Red Army invasion of the Democratic Republic of Georgia in 1921, which brought end to the country’s short-lived independence and initiated a period of seventy years long Soviet rule.

The exhibition was organised by the Institute for Development of Freedom of Information (IDFI) with cooperation with Society for Memory and Support for Victims of Political Repressions of the Soviet Period Memorial.

‘The aim of our exhibition was to raise the issue of Soviet-era political repressions within the society. The exhibition consists of pictures and copies of documents, such as documents provided by families of people who suffered deportations. The pictures show not only the plight of people who fell victims to repressions, but also their families. We want the society to remember the consequences of the Red Terror’, Davit Maisuradze, the project’s coordinator at IDFI told DF Watch.