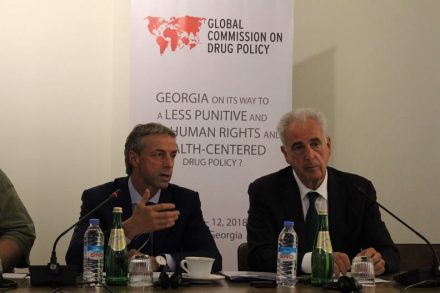 Two commissioners visiting Tbilisi urge the government of Georgia to go ahead with bold reform of drug policies, insisting that ending punishment does not mean encouraging or condoning the use of drugs, but rather it empowers individuals and communities, promotes better prevention and easier access to treatment, and builds confidence between the State and the citizens.

Commissioners Michel Kazatchkine, former Executive Director of Global Fund to Fight AIDS, Malaria and Tuberculosis, and Pavel Bém, former Mayor of Prague, are visiting Georgia to meet with the Ministers of Justice, of Labor, Health and Social Affairs, and of Education and Science, as well as the Speaker of Parliament, civil society and people who use drugs at a time when the Parliament of Georgia is currently engaged in a promising debate to reform its drug laws and possibly by ending the criminalization of possession  for personal use.

In light of these reforms, Commissioners Kazatchkine and Bém highlighted the Global Commission on Drug Policy’s 2016 report Advancing Drug Policy Reform: a new approach to drug decriminalization, which details the destructive and harmful consequences of the punitive approach to drug policy.

“Georgia has been implementing an efficient harm reduction program for over ten years ago. Access to clean needles and methadone have allowed a progressive reduction in new HIV infections among people who use drugs. Decriminalizing drug use and possession will further contribute to allowing people to access these life-saving services without fear of legal coercion,” Commissioner Kazatchkine said.

“The Czech Republic decriminalized the use and possession of drugs over a decade ago, with very positive results. On this visit we shared our experiences and those of our colleagues at the Global Commission, to contribute to the current debate on defining appropriate drug policies that are adapted to the particular environment and needs of Georgian people,” Commissioner Bém said.

The Global Commission on Drug Policy was established in 2011 by political leaders, cultural figures, and globally influential personalities from the financial and business sectors. The Commission currently comprises 24 members, including 12 former Heads of States or Government, a former Secretary General of the UN and three Nobel Peace Prize laureates. Its mission is to promote evidence-based drug policy reforms at international, national and regional levels. These reforms must promote public health, social integration and safety goals, with a strict regard for human rights.