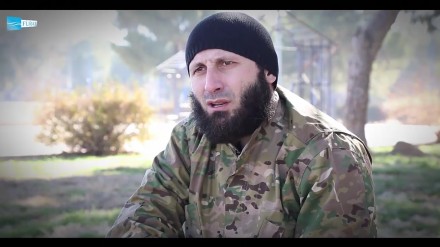 Badri Iremadze, a still from the video

A new Georgian-language video produced by Furat, a media company affiliated with the Islamic State, has been circulated on social networks.

The video is a commemoration of three Georgian fighters who died during an offensive in Deir ez-Zor in Syria earlier this year. The men’s noms de guerre were Anas, Abu Maryam al-Jurji, and Abdul Wahhab. Abu Maryam has been identified as Khvicha Gobadze, a native of Achara region and the leader of the grouping. He also appeared in an online video circulated  in November 2015, in which he delivered threats towards his country.

The video opens with a phrase written in Georgian, which says: ‘My God! I hurried towards you, so you’d be pleased with me.’ 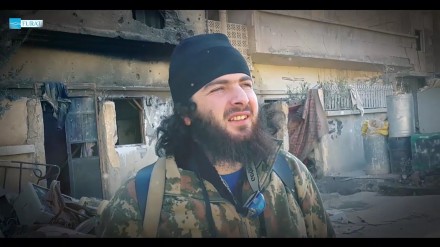 Ramzan Pareulidze, a still from the video

The video is narrated by four Georgian fighters affiliated with the Islamic State, who recall how the three men joined the jihad and in what circumstances they died. According to the recording, Mr Go-badze became a shahid (‘martyr’) while trying to save an Ingush fighter during the battle. One of the narrators is Badri Iremadze, a native of Achara region, who appeared together with Mr Gobadze in the November 2015 recording.

Parts of the video show pictures and video excerpts of the three deceased Georgian fighters with a nashid (‘a cappella Islamic song’) playing in the background.