Georgian-born IS militant dies in Syria

Georgian-born IS militant dies in Syria 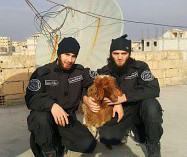 TBILISI, DFWatch–A Georgian citizen from Adjara who theratened his home country in an online video in November has died in Syria.

The militant Khvicha Gobadze’s death was confirmed by his family, as well as the State Security Service.

The Security Service did not offer more details than the fact that he has died. His wife, Salome Katamadze, posted a farewell letter on her Facebook page where she described how she loved her husband and is waiting to meet him in heaven.

Gobadze’s father Ilia told Interpressnews that he learned about his son’s death from the Internet. He said he spoke with his son two weeks ago and asked for the family to be left alone.

The family now lives in the village Akhalsheni near Batumi.

Khvicha Gabodze had one newborn daughter. According to his father, he left Georgia in September and never came back.

Two months later, Gabodze appeared in a video appeal, where ISIS members threatened to kill those who would fight against the so-called Islamic State. The video clip was published on November 23.

A week ago, Mikhad Turkoshvili (22) from Pankisi Gorge was reported dead. He and Gobadze were allegedly fighting together for ISIS.