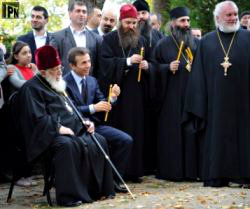 96 percent of those asked say the like the patriarch. 61 percent say they like Davit Usupashvili, Speaker of Parliament; 51 percent like Kakhi Kaladze, Minister of Energy and Vice Prime Minister.

According to the poll, 67 percent of those questioned say they like Irakli Alasania, while 64 percent like Prime Minister Irakli Gharibashvili, 7 percent less than in November, 2013.

NDI asked respondents how would they rate the performance of each famous person, and again the patriarch is number one with 77 percent saying he’s doing very well, 14 percent answering well. The speaker of parliament is in second place with 37 percent saying he’s doing very well or well, followed by MP Davit Bakradze from UNM with 28 percent characterizing his performance as well or very well. The next one on the list is Public Defender Ucha Nanuashvili.

The highest score among ministers in terms of performance is achieved by Defense Minister Irakli Alasania, with 44 percent saying he is doing very well or well, followed by Health Minister Davit Sergeenko with 32 percent, Justice Minister Thea Tsulukiani with 35 percent, Foreign Minister Maia Panjikidze with 31 percent and Energy Minister Kakhi Kaladze with 31 percent.

The Georgian Army is on the top of the list among state bodies with 61 percent followed by the police with 51 percent and the Central Election Commission with 22 percent.