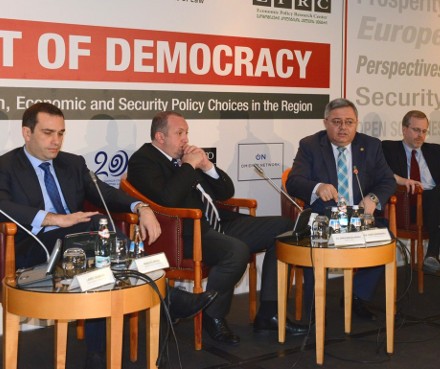 The local US embassy and Open Society also helped organize the conference, which was titled ‘Essence of Democracy: Foreign, Economic and Security Policy Choice in the Region.’

In his opening speech, President Giorgi Margevlashvili argued for why it was important that Georgia signed an association agreement with the EU last year, and the significance of a new pipeline project across Turkey called TANAP, bringing natural gas from the Caspian Sea to Europe, bypassing Russia.

Some of the other speakers were Larry Diamond, Director of the Center on Democracy, Development, and the Rule of Law at Stanford University, David Kramer, Head of McCain Institute, and the leader of Free Democrats, Irakli Alasania.

The second day of the conference was dedicated to economic issues. One of the guests was Giorgi Kadagidze, President of the National Bank of Georgia.