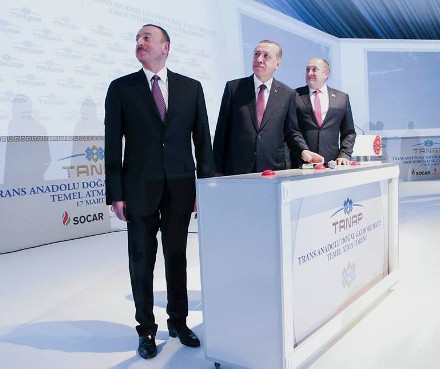 TBILISI, DFWatch–The presidents of Georgia, Turkey and Azerbaijan have agreed to start construction of a natural gas pipeline which will bypass Russia and reduce Europe’s energy dependence on Russia.

The ceremony was held in Kars, a Turkish city near the Georgian border.

TANAP, or Trans-Anatolian Natural Gas Pipeline, is the “missing piece” in a plan by the European Union called the Southern Gas Corridor, meant to connect the gas fields in the Caspian Sea with European consumers, bypassing Russia, the purpose being to relieve Europe from its energy dependence on Russia.

There is already a pipeline from Baku in Azerbaijan through Georgia and ending in Ceyhan in Turkey, and another consortium is building the Trans-Adriatic Pipeline, from Kipoi, Greece, to San Foca, Italy; a project that will  be completed in 2018.

The new TANAP pipeline, which will connect these two, is projected to cost USD $10-11 billion and its completion date is stipulated as 2018.

Turkey considers this project a major priority, even more important than Turkish Stream, a joint Russo-Turkish pipeline project which will transport natural gas from the Russian Black Sea port of Anapa to Turkey.