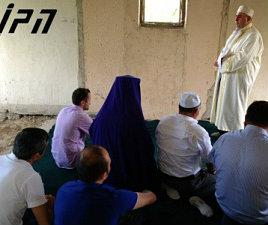 Friday prayer in Samtatskaro, a village in the Kakheti region in eastern Georgia. (Interpressnews.)

TBILISI, DFWatch–In the village Samtatskharo in eastern Georgia, Friday prayers went ahead without incident yesterday, but the Muslims who live in the village stayed away because of threats.

Only Muslims from other areas and guests from the government attended the prayer.

Adam Shantadze, Deputy Mufti of Georgia, and Tariel Nakaidze, Chairman of Georgian Muslims Union and a few other Muslims, came to Friday’s prayer in Samtatskharo, a village in Kakheti, where Christians and Muslims have been in conflict for the last few months. Public Defender Ucha Nanuashvili and representatives of the US embassy also attended the prayer.

Hajji Suliko Khozrevanidze and his wife, who last week was beaten by the locals did not attend. He said about 200 local villagers had threatened them that if they went to the prayer they would make his family leave. Khozrevanidze said that his grandchildren were scared by the locals, and that he himself received threats that his family would be killed.

No Muslims from Samtatskharo came to the prayer. During the prayer local villagers were gathered outside the house, where the religious ritual was conducted. Police was also mobilized on Friday.

“The prayer was conducted normally today, but only people from other regions attended it, while local Muslims didn’t come due to fear,” the public defender said. “It is important that the government provides a guarantee so that citizens won’t live in fear.”

Paata Zakareishvili, Minister of Reintegration, who also attended the prayer, thinks that the conflict is not over and things need to be done, as there were some conditions agreed during his previous visit to Samtatskharo, which weren’t fulfilled.

He said it is important to know how many Muslims want to pray at this place every Friday because at least 4-5 need to attend it and the majority of local Muslims are afraid to come, only others come to pray.

“A few Muslims are enough to conduct Friday prayer and enough came today, but no locals were among them. I hope they will soon be assured that there is no threat and come to pray, and we will finally get rid of the tension,” the minister said.

After the prayer Zakareishvili met with several local villagers to personally explain to them that they do not have a right to interrupt Muslims from conducting their religious rituals.