Mine workers on strike in Chiatura describe unfair conditions

Mine workers on strike in Chiatura describe unfair conditions 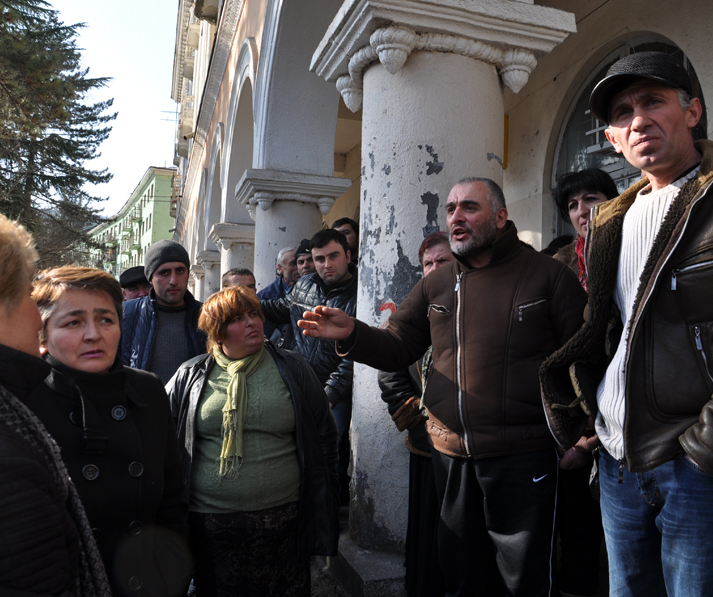 TBILISI, DFWatch–The mine workers in Chiatura have once more gone on strike. For five days, several hundred have not showed up at work, while others say they are ready to join the strike.

After the change of government in 2012, the miners in Chiatura went on strike for more than a month, demanding improved working conditions and higher salaries. In the end, they were promised by management that their demands would be accommodated.

Now, the workers claim that almost nothing has changed since 2012, and in some ways the situation has gotten even worse.

Some of the workers still fear they will be fired and are afraid of joining the strike. According to Roland Abdushelishvili, a worker from the Itkhvisi mine, one of his co-workers who was responsible for gathering the workers for the strike on Tuesday, was beaten by the director of the mine, who forced him to get into a car and go to work.

One of last year’s demands which has been fulfilled is that food for workers is now packed clean on disposable plates. However, the food they are being served is substandard.

During a day, a worker gets a small amount of cottage cheese, sour cream, butter, bread, a small cookie and three slices of sausage, which according to workers go blue or green if one doesn’t eat it fast.

“Even dogs refused to eat those sausages, and some of us get sick after eating them,” one of the worker told us.

“Sometimes it is good. But we don’t know what the meat is made of. At least it is packed clean.”

Abdushelishvili says, normally the type of food served should change, so there should be for example fish or at least eggs or something else, but usually the food is the same every day.

“We were told that a single portion of our food costs 2-3 lari, but today I got a message that 11 lari was taken from my salary for food,” he says. “I don’t even know whether this is per a day or per month. If it is per day, it is too expensive, but if it is per month then it is suspiciously cheap.”

Workers pay for this food from their salary.

Another problem is that mines and plants aren’t able to fulfill their monthly plan, because the equipment is old and rusty. Their machinery has never been upgraded. Workers say three shifts work during a day and the plants only stop working for ten minutes in the morning. It has never been stopped for repairs. The machinery is replaced only if it fails during work, and in some cases it is blamed on the workers, who then have to compensate part of the damage.

Last year, management also promised to bring shelves with two sections for workers, one for working clothes and another for ordinary clothes. It wasn’t done.

The bathroom was partly refurbished, but only the men’s section. The bathroom was closed for a few months for refurbishing; but in the end it turned out that only the showers had been changed and many of them broke down too soon.

Last year, when DF Watch visited Chiatura, we were allowed to go inside the mines and plants and take pictures, but this year we weren’t let in. A guard told us he would have problems if he let us in. But he showed us the women’s bathroom, though without letting us take pictures.

There is water on the concrete floor. The walls have cracks, and there are no windows; however, there is a terrible smell making it almost impossible to stay there more than few minutes. The chairs for changing clothes are standing in water.

In the ten-storey plant, where most of the employees are women, there is no toilet and there are no windows on most of the floors.

Marina Khvedelidze, who works at this plant, tells us that her husband was threatened yesterday that if he went on strike tomorrow, he would be fired. She says in most of the cases workers aren’t allowed a day off.

“My daughter got married. I asked the director to let me go to attend her wedding, but he said he would reduce my salary for the day of my absence,” she said. “In addition, those in management are very rude. Imagine me holding a paddle and hose the whole day and someone yelling at me for no reason.”

According to Abdushelishvili, about 200 people came to a rally at the management building, but the problem is that many of the workers who protest and do not work, do not come to rallies. 105 people are not working now at the Itkhvisi mine, 125 – in Shukruti, with additional 325 people in other plants.

The workers describe another problem – all of them receive a monthly message, which in most of the cases is unclear and may contain many question marks in the text. The message informs the about the amount of salary and the reasons for cuts in the salary.

Roland showed us the last message he received, which reads that last month the amount of his working days was just one day, but the amount of working hours was 168 hours. 11 lari was cut for his food, also nine lari for insurance, and compensation for night shifts 26 lari. The rest of the message body is full of question marks.

The administration has not yet responded to the workers. On Wednesday, several MPs are expected to meet with them in Chiatura, while Roland is willing to continue rallying with the others until their demands are met.