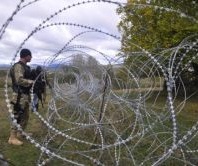 Razor wire is one of the measures Russian border guards are using to enforce the de facto border. (Interpressnews.)

TBILISI, DFWatch–Russian soldiers have resumed the installation of warning signs and barbed wire at villages near the border with the breakaway region South Ossetia.

A sign warning about the de facto border was installed in the village Ghogheti near Kareli on Tuesday.

“This happens on the cultivated lands of our population,” said Davit Sujashvili, Head of the Interior Ministry’s Department of Analysis.

“We will strengthen the patrolling for more security and inform our partner countries and diplomatic missions.”

He said Georgia will raise the borderization issue at the next round of Geneva talks, which are regular meetings between the warring parties in August 2008.

Russians started installing barbed wire in the village Atotsi, near the town Kareli, on Tuesday. Villagers say that part of their farm lands ended up on the other side of the wires.

Georgia’s Foreign Ministry on Tuesday responded with a statement expressing concern. It notes that the installation of such fences had been suspended for the past two weeks.

“Regrettably, and despite numerous calls by the international community, the Russian Federation is continuing to violate fundamental principles of international law as well as the commitments it undertook under the 12 August 2008 ceasefire agreement,” the statement says.

It condemns Russia’s actions, which it says has a negative impact on the everyday life of the local population and restrict their right to free movement, education in their native language, economic, cultural and social rights.

The local population has also been prevented from carrying out agricultural work and gaining access to cemeteries and emergency medical services.

“The critical nature of the situation in Georgia’s occupied regions and adjacent areas once again underlines the importance of the need to establish international mechanisms for monitoring security and human rights therein,” the ministry writes.

The Foreign Ministry calls on the international community to undertake effective measures against what it terms illegal actions.

Minister of Reconciliation and Civil Equality Paata Zakareishvili told journalists that it was expected that the Russians would resume the installing of wires after the Olympics. It is obvious that Russia has very few resources left, he added.

“We see how it acts in Ukraine and will see its actions in other countries, but thank God the smart steps of our government doesn’t give them lots of opportunities,” he continued.