Kobuleti, where Muslims are not welcome

Kobuleti, where Muslims are not welcome 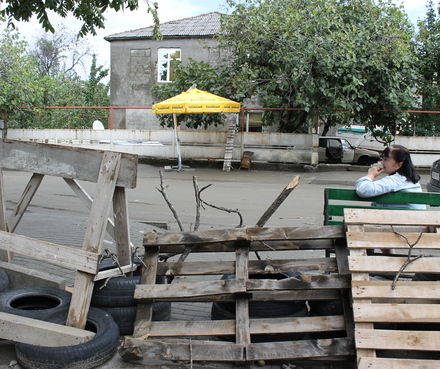 Locals in Kobuleti have set up barricades and keep guard 24/7 to prevent Muslims from entering a planned madrasa. (DF Watch.)

KOBULETI, DFWatch–In the past couple of years, Muslims in Georgia have experienced more and more animosity directed toward them. In 2012, Muslims were opposed when they tried to open a mosque in Nigvziani; in 2013 villagers in Samtatskharo were not allowed to perform Friday prayers for a period of time; soon after a scandal broke in Chela, when a minaret was dismantled.

And now another conflict has caught the public’s attention in Kobuleti, where the local Christian majority has started opposing the Muslim minority’s plans to open a religious school in their neighborhood. 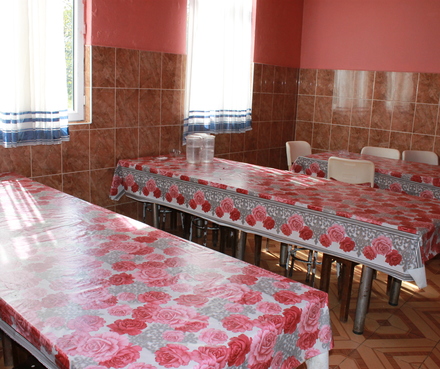 The canteen in the old madrasa. (DF Watch.)

The house lies on Lermontov Street in Kobuleti, and is rented by Ramaz Kakaladze, head of an organization called “Relations of Georgian Muslims”, from the Turkish owner. On September 15, this building was supposed to open its doors as a new Muslim boarding school (madrasa), but it still stands empty because the neighbors are preventing it from operating.

For the last six months, locals have been trying to obstruct the construction legally and physically by patrolling the neighborhood day and night, blocking streets and organizing protest actions. Their dissatisfaction reached a peak on September 10, when a pig was slaughtered here and its head was nailed to the door of this building. 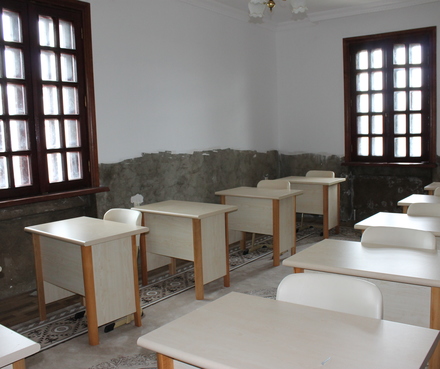 The classroom in the new madrasa. (DF Watch.)

The protesters agreed that the legal documents for this building are in order, but at the same time they insisted that the voice of the dissatisfied community should be heard and the Muslim religious school should not function in this Christian-only neighborhood. DFWatch decided to take a trip to Kobuleti and see the ongoing conflict with our own eyes. 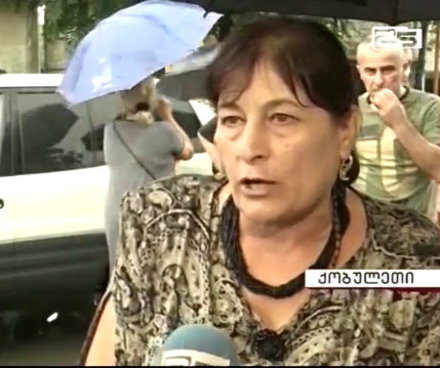 When I arrived on a cloudy Friday morning, the street looked quiet.  Only a police car that was parked across the street from 13 Lermontov Street, and a makeshift barricade made up of rubble, pallets and construction leftovers in front of the house suggested that there was something going on.

But in a few seconds, I was surrounded by more than a handful of local residents, passionately telling me about their struggle against the boarding school, insisting that I hear their side of the story. 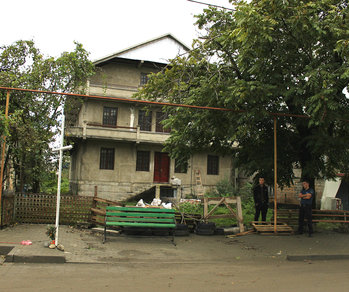 The house where a new madrasa is planned. (DF Watch.)

Russian language teacher Zhuzhuna Kaladze, who lives in the adjacent house, walked me through a neighborhood drama underlined by deceit, disinformation and mistrust. She explained that the house on 13 Lermontov Street used to belong to a Georgian family, but they sold it to “a Turk from Istanbul, Mustafa Buyuk”.

According to her, the new owner never showed up here, and his representative, Mr Kakaladze, took care of everything. She accuses him of having lied to all the neighbors by telling them that only Georgian families would be living in this three storey house. “We were very happy at first, that there would be true Georgians living here. But this traitor was lying to us. However, we understood that there was something fishy here, when they [the new owners] wanted to build a three-meter tall fence, so the house would be hidden from us. Then we were finally told that there will be no Georgian families in this house, but some dark secret instead,” Zhuzhuna says.

After realizing this, the residents on Lermontov Street used their own information networks and got to the very core of the issue. They unveiled that the house will be turned into a Muslim boarding school.

Shocked neighbors started to act. They established 24/7 neighborhood watch, so that the construction of the madrasa could be slowed down, they addressed all the authorities, secular and religious, expressing their concern and displeasure with having a Muslim school in all-Christian neighborhood.

“There is not a single Muslim living here. And for us, Christians, who live here, this is a very scary situation. We do not accept and will never accept such things. We don’t want them here […] We are not against their religion. They can pray as much as they want in their countries, in their lands, but not here, where true Christians are living,” Zhuzhuna says firmly.

Nana Kurshubadze, who lives a few houses further down the same street, supports her friend, saying that if they will not prevent the madrasa from functioning, there will be blood in the future. “And we don’t want that. We just want to protect our children,” Nana explained.

Another member of the neighborhood watch boasted that not only Kobuleti supports them, but also Batumi, Ozurgeti, Kutaisi and even Tbilisi people can come at a moment’s notice.

Afraid of losing their religion

So what are their biggest concerns? The dwellers on Lermontov Sreet stated that Islamic religious buildings are part of a Turkish invasion in Adjara. “This is a part of their ideological war, a war without guns,” Zhuzhuna said.

Moreover, she and other residents on the street are afraid that this madrasa will be just the beginning, and a mosque will soon follow. Which, in itself, will lead to a constant call for prayer and never-ending noise in this neighborhood.

Also, people here say that they are afraid that the opening of this madrasa will greatly expand the Muslim population. Zura, another local taking part in the volunteer neighborhood patrol, illustrates how Islamic boarding schools recruit their students among poor Georgian families. According to him, these children are promised free secondary education and even free university education in Turkey. “And this is what attracts these families. Not everyone has money for their children’s education. But no real Christian will sacrifice their children’s faith for education. No, they better be uneducated, work the land, but stay Christians,”  Zura explained.

The blockade of the school

For the last six months, the neighbors of the madrasa have therefore been doing everything they can to prevent the school from opening. As Zhuzhuna explained, she would not oppose a madrasa somewhere in the fields, where no-one is living. She added that there is one other madrasa in Kobuleti, so there is no need for Muslims to open a new one.

The school year started on September 15, but the neighbors managed to keep the madrasa almost empty. Almost, because ‘up to three people are allowed inside’, according to the volunteers.

They explained that more people would mean more possibilities for Muslims to bring their children in, and this would mean a lost fight for the neighbors. “We keep watch all the time, so that they won’t bring kids here. Because how would you chase children away? It is not humane, so that is why we are not allowing them to bring the children in”, Zhuzhuna said, and added that she is afraid that Muslims will sneak the students in at night, when the watch is the weakest.

At the same time Zura complained that this 24/7 watch requires a lot of devotion: people are skipping work, losing sleep, everyone is tired. One of the solutions that he and other volunteers can see is for the government to install security cameras around the house, so the Muslims can not get in the house and the neighbors could finally call off their siege.

Lonely student under the siege

When I finally got to the madrasa, I was greeted by Kakha Kakhadze, the only student who had been living here since September 15. He is a senior year law student at Shota Rustaveli University in Batumi, but has also studied Islam for more than eight years. The last three years, he studied in the old Kobuleti madrasa, and this year he was suppose to start his school year here.

Apart from him, there are some other people who come and leave, but he is the only one living permanently at this boarding school. He told me that he and other people who stay temporary rely on food and water brought by other Muslims, as the neighbors do not let anyone in after they leave the house.

According to Kakha, the hostility towards Muslim religious buildings comes from  the popular belief that all Muslims in Adjara are influenced by Turkey. “They regard religious buildings as Turkish occupation and Turkish expansion. But at the same time, they are fine with Turkish shops, Turkish restaurants or Turkish hotels, ” Kakha said. He also stressed that he is Georgian, and Islam does not  prevent his patriotic feelings towards Georgia. 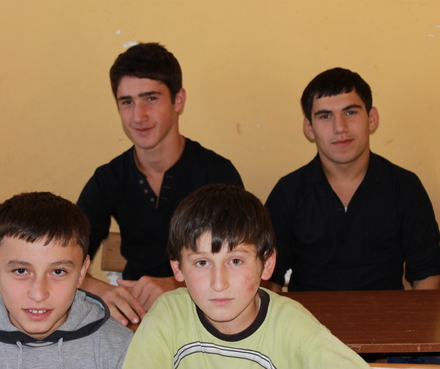 The school, designated for 40 students, is now silent. It is fully equipped and prepared for boys and young men to start their lessons at any moment, when the neighborly siege ends.

If this madrasa starts functioning properly, the students will be spending 1.5 hours every day studying the Quran, and all the remaining time will be devoted to ordinary public school curriculum, as in other madrasas in Georgia.

As this madrasa is still inaccessible to students, the old madrasa on Rustaveli Street, Kobuleti, which has been functioning since 2004, has taken in three times its normal capacity. At the moment, there are 29 students in a boarding school meant for 10 students; the outside kitchen and small classrooms are in dire need of renovation, and the students are sleeping on mattresses that are put in the common prayer room every evening.

Mufti: we are not moving

However, the  mufti of Georgia Jamal Paksadze said that they are not planning to move anywhere from Lermontov Street. He stressed that in the current situation, Muslims are the victims, and not vice versa. “It is private land, and neighbors should not decide whether we can be there or can not. For example, I also live in a neighborhood where 99 percent are not Muslims, but no-one can just tell me to go away,” Paksadze says.

At the moment, local authorities are trying to solve the conflict, he says, adding that he hopes for an impartial solution.

At the same time, the most influential institution in Georgia, the Georgian Orthodox Church (GOC), stands for the rights of the majority population. In a statement issued right after the infamous pig’s head incident, it condemned it as an islamophobic act, but at the same time pointed out that the construction of the Muslim school is against the will of the majority of the population. 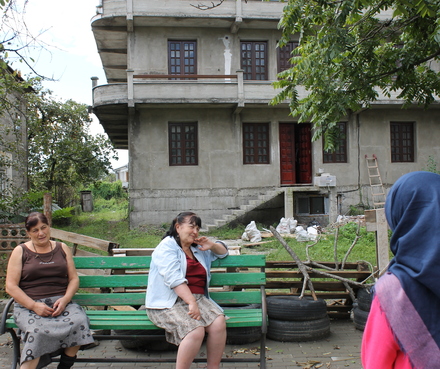 Neighbors are still keeping watch at the barricade 24 hours a day. (DF Watch.)

While the population in Kobuleti are trying to sort out the madrasa conflict, human rights activists across Georgia are calling for tougher punishment for those who insulted Muslims with a pig’s head.

According to local media, one of the initiators to nail a pig’s head to the entrance of the madrasa was Archil Gvianidze, a member of a Kobuleti youth organization linked to the Georgian Dream coalition. He and his accomplices received a 100 lari fine each for ‘petty hooliganism’.

This decision was criticised by human rights activists. On September 24, a group of seven non-governmental organizations circulated an open letter, in which they state that nailing a pig’s head to a Muslim boarding school “was the rudest demonstration of hatred and persecution”, therefore categorizing the incident as ‘petty hooliganism’ is wrong.

According to civil activists, this incident violated section 156 of the Georgian Criminal Code, which deals with “persecution for speech, opinion, conscience, religious denomination, faith or creed or political, public, professional, religious or scientific pursuits” and prescribes prison sentence for violators.

In addition, they criticized the police for not doing anything when Muslims are restricted from entering and leaving their property.