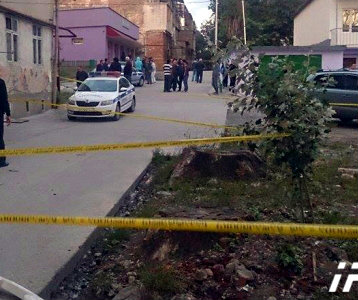 21 year old Mirza Gochuadze died after being shot by police during a car chase in Kutaisi Friday. (Interpressnews.)

TBILISI, DFWatch–A police officer who shot to death a 21 year old man in Kutaisi on Friday has been arrested.

The Ministry on Internal Affairs has not released the name of the officer, who is suspected of exceeding his power. Details about the shooting are sketchy, which has caused strong resentment in Kutaisi and elsewhere in Georgia.

In a statement issued soon after the shooting on Friday, the MIA claimed that the 21 or 22 year old (accounts vary) Mirza Gochuadze was shot at while trying to run into the police officers after he failed to comply with instructions from the police to stop his Subaru Forester.

However, some of his friends and witnesses argue that the bullet hit him in the back of the head, which casts doubt on the MIA’s version, that Gochuadze intentionally tried to run into the police officers.

The office of the Public Defender said in a statement on Saturday that it had begun reviewing and monitoring the case. It also took the opportunity to reiterate its long-standing demand, to creating a special investigative body that will investigate allegations of crimes commited by law enforcers.

The investigation is conducted by the Prosecutor Office.

The police suspected Mirza Gochuadze of robbing a grocery store located near the site of the shooting. The grocery store had been robbed overnight and the police was out looking for the robber.

The MIA has not commented on Gochuadze’s connection to the robbery. His friends and relatives deny there is such a connection.