21-year old dies after being shot by police

21-year old dies after being shot by police 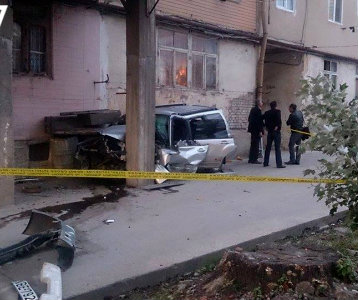 21-year old Mirza Gochuadze died after being shot by police in a car chase. (Interpressnews.)

TBILISI, DFWatch–A 21 year old man was shot by police during a car chase Friday in Kutaisi. The man later died from his injuries.

The police shooting sent shockwaves through the local community in this Georgia’s second largest city, where people remember how police used tough tactics during Saakashvili, and how the groups currently in government used to criticize this.

Accounts of the incident differ. Later in the day, the Ministry of Internal Affairs issued a statement saying that the victim, Mirza Gochuadze, was driving in a Subaru Forester when he was chased by police for alleged theft. Gochuadze didn’t comply with instructions from the police and even tried to run into the police officers, the MIA claims.

According to the statement, a police officer shot at the car, which was followed by a car accident.

The man later died at the hospital. The statement doesn’t say whether the young man’s death was caused by the shooting or by the car accident.

But according to relatives and friends of the deceased, he was innocent of the theft but was driving the car without a driver’s license. When the police asked him to stop, he tried to escape, fearing that he would be fined for being caught driving without a license.

Relatives claim that Gochuadze’s death was caused by a bullet wound directly to his head.

Later a crowd of upset relatives and friends tried to storm the hospital where the wounded Gochuadze was being treated and where he later died.

The police officer suspected of shooting the young man was interrogated and suspended until the end of the investigation. He is suspected of exceeding his power.