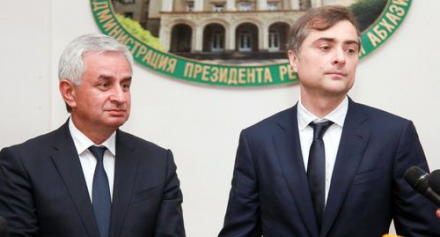 Embattled de facto president of breakaway Abkhazia Raul Khajimba had to file his resignation amid growing protests of opposition on Sunday evening.

Immediately before the resignation, a group of about a hundred of opposition supporters came to his state datcha near Sokhumi to stage a rally demanding him stepping down.

Meanwhile, few hours before, Khajimba met with Aslan Bzhania, the leader of opposition, and other politicians. Russian envoy Rashid Nurgaliev was also present at the meeting.

Reportedly a top Kremlin fixer Vladislav Surkov also landed in Sokhumi on Sunday. Surkov is an advisor of President Vladimir Putin and key person in shaping the Kremlin politics toward its Abkhazia, South Ossetia and pro-Russian regimes in Eastern Ukraine.

The same demand was aired earlier, on Saturday evening, by key figure behind storming of “presidential” office, Akhra Avidzba.

On Friday, de facto parliament voted in favor of Khajimba resignation but he rebuffed any notion of stepping down.