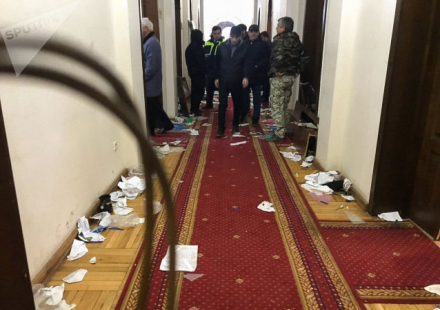 Opposition activists at the Khajimba’s office.

“I am in Sukhumi at the workplace in the state building,” Khajimba was quoted by Interfax. The authorities work to “localize” the unrest and maintain the “constitutional order”, he said.

“If necessary, I will introduce a state of emergency in the country. This development has already been discussed at the Security Council,” Khajimba stated via his official website. He accuses the opposition of attempting a coup d’etat.

On Wednesday afternoon several hundred opposition activists stormed the de facto president’s office in Sokhumi. They broke into the building, breaking windows and doors. After minor clashes with guards, they took over the building but later walked out and continued their rally outside on the doorsteps.

Raul Khajimba fled his office and took refuge at the state datcha.

Meanwhile, at a session of the de facto parliament, speaker Valeri Kvarchia sustained a heart attack and was hospitalized.

Currently, the opposition keeps on protesting at the president’s office and demands Khajimba’s resignation.

One of key opposition figures, Aslan Bzhania, has joined the ongoing rally at the president’s office. Alhaz Kvitsinia, the opposition’s presidential candidate, is also at the scene.

Akhra Avidzba, the field commander of pro-Russian mercenary corps in Ukraine’s Donbass region, is one of the organizers of the rally.

The Russian embassy in Sokhumi has asked people to avoid places of mass unrest.

Raul Khajimba is a former KGB operative and close ally of the Kremlin. He won de facto presidential elections against Alhaz Kvitsinia on September 8 with a narrow margin. The opposition claimed that election was rigged and filed a lawsuit with the Sokhumi court. The court hearing on Wednesday was cancelled indefinitely due to mass protests.

Earlier this year Aslan Bzhania, a very popular opposition politician in Abkhazia, was mysteriously poisoned, and was replaced by Kvitsinia.