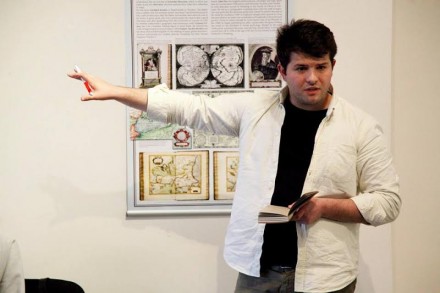 Ruslan Asad is an Azerbaijani civil society activist and a co-founder of the Thinking Citizen (Düşünən Vətəndaş) project, which brings together young representatives of Georgia’s ethnic Azerbaijani community. He told DF Watch about the project’s aims, successes, and future plans in the context of issues faced by the community.

DF Watch: How did the Thinking Citizen initiative start?

Ruslan Asad: When I came to Georgia I would spend time with my friends — who later became co-managers of this project — and we had intellectual conversations about civic activism among the ethnic Azerbaijanis who are living in Georgia. The idea came to our minds that all these conversations which we were having privately could be extended to others who had no opportunity to listen to us. After five or six months of planning, we designed the project and in February of 2016 we decided to launch it.

DF Watch: Was it difficult to get funding?

Ruslan Asad: We haven’t received any funding. Each of the five people in this project allocates 10 percent of our monthly salaries in order to make it function. The money has been enough in the current format. As of September, we’re planning to increase the project’s quality and to expand it. We want to have a more visible social media presence and produce better videos, which is why we are planning to apply to donors for funding.

Still, the leading idea is to have the project dependent on individuals who really care about this community rather than on outside donors. Donors obviously care and we respect that, but we believe that community members also should take financial ownership over the issues that they have.

DF Watch: What are your main activities in the framework of this project?

Ruslan Asad: We have two main sets of activities. Firstly, we have interactive lectures. We invite speakers, mostly Georgian, to come and discuss politics, civil society, literature, art, human rights… One of the goals is to convey the messages of human rights through art, music, and literature. We had a lecture delivered by poet Eka Kevanishvili, who talked about feminist features in Georgian literature. It was an insightful and interesting talk.

Secondly, we organize debates. We identify issues which are important for the community and we engage people from the audience who have certain specific views about this issues. Each time we invite six participants to engage in a debate, among whom one is a moderator and makes sure that the rest don’t agree with each other.

DF Watch: How successful is this format among Georgia’s Azerbaijani community?

Ruslan Asad: It’s a difficult question and it’s something which we ourselves keep thinking about. There is one realistic indicator of success: there is a core group of ethnic Azerbaijani students who are interested in attending the meetings regularly and to actively participate, bringing their own questions, criticism, and comments.

Another indicator is that we’ve been able to create an opportunity which is always available for them. Every week, at a stable time and venue, we’ve kept our promises. A lot of people in the past initiated something, but ended up never keeping their promises. They either used the community for their surveys or reports, but never really followed upon with that. Our success comes from being consistent, keeping our promises, and organizing events which we think will be useful for them.

DF Watch: What do you think are the biggest issues which Georgia’s Azerbaijani community is facing and which your project is trying to address?

Ruslan Asad: The biggest issue is their representation in civic and political life of Georgia. They’re not able to have representatives they can turn to who are citizens of Georgia, speak proper Georgian, and at the same time speak proper Azerbaijani. Such people could represent them on a national or municipal level.

The second biggest challenge is the fact that the Georgian government hasn’t been able to come up with a coherent educational system. I can’t fully judge it, because it’s something very difficult to do when you have a multilingual society; it’s not only about different linguistic traits, it’s also about religious identities and how they see their own roles. Yet it is necessary to have a coherent educational policy that will help ethnic minorities by elevating them from where they are now and moving them closer to the general Georgian institutional environment.

DF Watch: Have you seen any success so far in these aspects? Have the participants of the project been increasingly engaging in civic or political activism?

Ruslan Asad: In fact, one person who’s regularly attending our lectures decided to run for parliament this year. I observed that he’s an independent person with his own independent view, who is genuinely interested in representing his community on a political level. There is a motivation to become engaged among other young people as well, not only in the political, but also in the civic life of Georgia.

DF Watch: Given the fact that certain organizers of the project are not Georgian Azerbaijani — they come from Azerbaijan — and given the very harsh situation of human rights, media, and general civil society activism in Azerbaijan, have you experienced any political or societal pressures?

Ruslan Asad: We haven’t faced anything of that sort from the Azerbaijani government’s side. Occasionally some of our participants try to find out more about our ‘oppositional identity’. We are trying to be very careful about how we design our communication with them, so we don’t bring the issues that Azerbaijan has to Georgia and we don’t advance an Azerbaijani agenda.

We’ve been very clear from the beginning that our target group are ethnic Azerbaijanis living in Georgia and our target issues are the ones which are faced by them. Our country is our country and in our free time we do care about Azerbaijan. Within this project, we have made this deliberate choice not to combine the two.

DF Watch: What are your plans for the future?

Ruslan Asad: Right now our angle is more educational, but we’re planning to develop components of skill development and capacity building. We are considering trainings on how to write — not necessarily journalism, but for example blogs, and how to conduct issue-oriented campaigns. We want them to see themselves as a part of solution to issues, rather than expecting everything to be taken care of by the state or by certain paternalistic groups, like families or ağsaqqals [‘elders’]. We want them to be active and to engage.