Homophobia in Georgia: tolerance is a myth

Homophobia in Georgia: tolerance is a myth 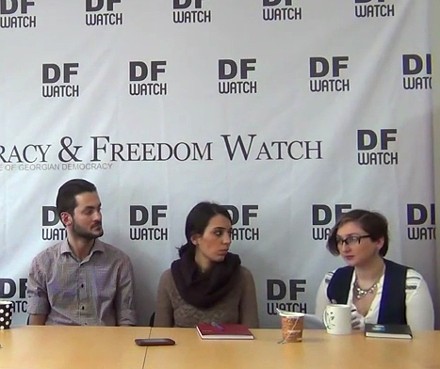 TBILISI, DFWatch–Georgians like to talk about tolerance as a part of the national psyche. But the ability to accept and live alongside people who are different from yourself seems to end when it comes to gays, lesbians and other sexual minorities.

According to NDI, only 16 % of Georgians think that the rights of sexual minorities should be protected.

DFWatch sat down with Levan Berianidze from Identoba, Tamta Mikeladze from the Human Rights Education and Monitoring Center (EMC) and Ana Lobzhanidze from the gender equality department of the Public Defender’s Office to talk about homophobia and discrimination of LGBT community in Georgia.

Levan Berianidze pointed out that Georgia is one of the most homophobic countries in Europe, as was illustrated by the violence against LGBT rights activists on May 17, 2013. He added that LGBT people experience various kinds of violence and discrimination on a daily basis in their families, workplaces, public institutions etc. But in his opinion, the level of physical violence against LGBT people is low, because ‘these people are not visible.’

Perhaps the most visible act of physical violence against LGBT community and activists happened on\underline{, when a small pro-LGBT rights demonstration was attacked by an angry mob led by radical priests, and several people got injured. Almost two years have passed since, but no-one has been punished for the violence that day.

Discriminated by the police

Lobjanidze underlined that although the current legislation does not discriminate against LGBT people, the reality is different.

In 2014, the gender equality office at the Public Defender received 153 complaints, and 22 of them were from transgender people.

“Transgender sex workers is one of the most vulnerable groups. They face human rights violations even from the police,” Lobjanidze said.

According to Mikeladze, the LGBT community is not the only victim of discrimination.

All three interviewees agreed that the new anti-discrimination law, adopted in 2014, is a positive development. But Mikeladze stressed that this law was adopted because it was required by the EU for the visa liberalization process.

“If not the requirements for the visa liberalization process, it would not be in place,” the EMC representative told the panel.

In addition, the implementation of this law is far from perfect, as the main watchdog, the ombudsman, has limited powers and limited resources, Berianidze explains, and mentions one recent example.

“A couple of weeks ago, there was an incident; a lesbian couple was denied service at McDonalds. We sent them to the ombudsman, and currently we are working on this case together. The Public Defender’s Office asked the management of McDonalds to give them the video footage of that day, but they refused. And the ombudsman has no power to demand this footage,” Berianidze said.

According to the law, the ombudsman can only give suggestions and act as a mediator between the two conflicting sides, and does not even have power to fine offenders.

“This law will not be properly enforced, until there will be a mechanism allowing to fine for discrimination,” Mikeladze concluded.

As DFWatch has reported, the ombudsman recently published a report which states that Georgia has done nothing to protect sexual minorities, and that there is an increase of homophobic attitutes and crimes motivated by them.

You can watch the discussion here: