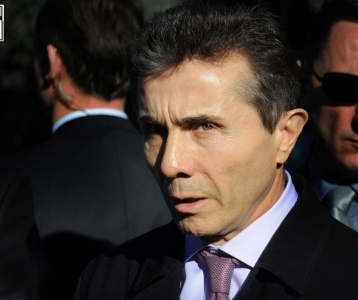 TBILISI, DFWatch–Former Prime Minister Bidzina Ivanishvili on Thursday spoke in the funeral of businessman Besik Khardziani, who was murdered at his house a few days ago.

He promised that those responsible will be held to account in accordance with the law.

Ivanishvili said the murder of Khardziani is not just one family’s tragedy.

“This is the second time a principled person who doesn’t give up fighting for justice is murdered by terror in our country, and they try to remind us about the past by doing this, to cause fear and anxiety,” the former PM said, adding that such actions will never grow in Georgia.

By ‘the second time’, Ivanishvili meant that the first time was the murder of rights activist Yuri Vazagashvili on January 20. He was killed by an explosion while standing on the grave of his son Zurab, who was killed by police in 2006 under questionable circumstances. As father, he had been campaigning for justice not only for his own son, but also other victims of the “shoot first, ask later” police tactics during Saakashvili.

The investigation into this case is continuing. A suspect has been detained, but it is unclear what motive the detainee, a former policeman, might have had for the murder.

The Prosecutor General’s Office has not yet made any comments about Khardziani’s murder. Now, one week after the murder, the only progress the office has shared with the public is that a team of investigators has been put together to study the case, search for evidence and determine the murder motive, and question witnesses.

In their testimonies, friends of the victim have accused a particular person who is a member of the National Movement. He had a dispute with the victim about property at Turtle Lake (‘Kus Tba’).

Khardziani was arrested for purchase and possession of drugs, which he denied. He believed that what happened to him was a setup as punishment for not letting members of the National Movement have shares in his business.

Lali Moroshkina, a former deputy prison minister in the current government, in her testimony told about a meeting she had had with Khardziani in Gldani prison in the autumn of 2012. At the meeting, Khardziani told her about physical and psychological pressure.

The Prosecutor General’s Office is working on creating a facial composite image of the suspect.