Poll shows little support for LGBT cause in Georgia

Poll shows little support for LGBT cause in Georgia 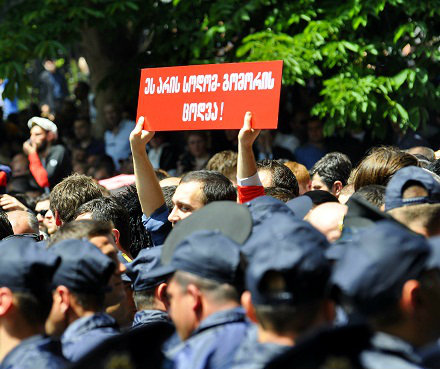 Counter-activist with poster saying “These are the sins of Sodom and Gomorra”. (DFWatch photo.)

TBILISI, DFWatch–A new opinion poll shows that 79 percent of Georgians do not support the anti-homophobia demonstration on May 17, 2013, which was disrupted by radical Christian clerics and their followers, resulting in almost 30 people being injured.

These are some of the results in a new survey of public attitudes carried out by National Democratic Institute (NDI) and published on Friday.

The survey includes questions about the latest important events that have taken place in the country, including the dispersal of an anti-homophobia demonstration and the detention of former Prime Minister Vano Merabishvili.

The questionnaire goes into some detail about the May 17 rally. People were asked whether they knew that the participants in the counter rally broke through the police cordon. 71 percent said they knew about it, and 30 percent think it was correct of them to do it, while 46 percent think this was wrong. 19 percent refused to answer.

In Tbilisi, the results to this particular question was different: 58 percent of the questioned did not think it was right to break through the police cordon.

Later on, the interviewers asked about the video footage which showed scenes of attacks as result of which private property was damaged, participants and policemen were injured. 70 percent are familiar with those incidents, 25 percent of them think it was right, while 49 percent do not think those actions were right. In Tbilisi, 58 percent do not think it was justified.

The Interior Ministry is investigating the incidents of May 17. 29 percent think this is unjustified, while 51 percent think all, including the clerics, must be held responsible for actions on May 17; 66 percent think so in Tbilisi.