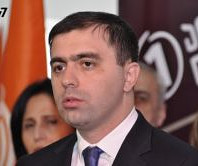 TBILISI, DFWatch–Georgia’s traditionalists have formed a coalition for the October 8 parliamentary election.

The initiative came from the Alliance of Patriot, whose leader Irma Inashvili came close to winning a contested local by-election last year, fraught with accusations of fraud by the ruling Georgian Dream coalition.

The name of the new coalition is Davit Tarkhan-Mouravi, Irma Inashvili – Alliance of Patriots – United Opposition.

Kakha Kukava, leader of Free Georgia, told DFWatch that they rule out the possibility of teaming up with Gogi Topadze’s Industrialists Party or the new party lead by Tamaz Mechiauri, both of whom are labelled pro-Russian, as are Kukava’s and Inashvili’s parties.