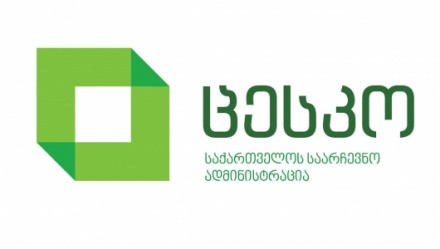 Logo of Election Administration of Georgia.

TBILISI, DFWatch–The Central Electoral Commission (CESKO) announced the preliminary results of the by-elections to Sakrebulos (‘municipal assemblies’), which were held on 22 May in nine majoritarian electoral districts.

The GDDG competed in all nine constituencies, the UNM in four, Free Georgia in four, People’s Authority in two, and Our Georgia — Free Democrats in one. There were also two independent candidates.

Several members of the UNM were brutally beaten by supporters of the GDDG in a scuffle which erupted in Kortskheli. MPs from both parties subsequently accused each other of having provoked the violence.

The UNM’s candidate, Besik Katamadze, won in Nasakirali near the town of Ozurgeti with a large margin – 59.6 percent. The GDDG’s candidate, Nona Tunadze, won 40.4% of the votes.

The GDDG’s candidates won in seven other constituencies, mostly by large margins: Vasil Chigogidze in Ozurgeti (64.56 percent), Koba Kakulia in Khobi, where he was the only candidate, Muradi Zakariadze in Tskaltubo (64.31 percent), Aleksandre Merebashvili in Metekhi near the town of Kaspi (65.48 percent), Vugar Mamedov (98.5%) and Pakhradin Sharipov (67.89%) in two constituencies in Gardabani, and Boria Pirtckheliani in Tbilisi’s Gldani district (80.69%).