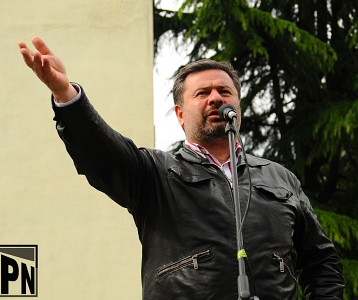 Erosi Kitsmarishvili took part in the founding of Rustavi 2, one of the largest TV stations in Georgia, and served as ambassador to Russia during the 2008 war. In July 2014, he was found dead in Tbilisi with a gunshot wound to his head. (Interpressnews.)

TBILISI, DFWatch–The Prosecutor General’s Office in Georgia said Wednesday it had solved the case about the politician and founder of the television station Rustavi 2 who was found dead in his car with a gunshot wound to his head in 2014.

A spokesperson said Wednesday that Erosi Kitsmarishvili committed suicide ‘because of certain circumstances’, and that no-one had brought him to that point. Instead, the reason for the tragic death was a grave financial situation, the Prosecutor General’s Office said.

Kitsmarishvili was discovered dead on July 15, 2014 in his garage. At the time of his death, he was campaigning to become mayor of Rustavi, a town south of Tbilisi, in the local election later that year.

President Giorgi Margvelashvili called the death a ‘murder’, and Zurab Kitsmarishvili, brother of the deceased, wrote in an appeal that he believed it was a murder.

An investigation was launched based on article 115 of the Criminal Code, about bringing someone to the point of suicide. But investigators could not find any evidence to support that theory, after interviewing 600 people and conducting tens of forensic analyses of videos and other evidence, phone calls, as well as studying Kitsmarishvil’s movements before his death.

Wednesday’s statement  by the office presents findings that Kitsmarishvili’s family had USD 312,000 and GEL 120,000 in debt to individuals, organizations and banks. His house was mortgaged and he didn’t have enough means to service the debt.

The Prosecutor General’s Office also published a video of the circumstances of Kitsmarishvili’s death.

“During the investigation, an investigative experiment was conducted in Erosi Kitsmarishvili’s car with the participation of Zurab Kitsmarishvili and independent experts, invited by him. Experts of various state agencies participated in the experiment in addition to the abovementioned persons. By taking the following facts into consideration: the blood sprays deployment in the car cabin, firing trajectory, gunpowder traces on E. Kitsmarishvili’s body and clothes, DNA traces on the weapon and microns of only the deceased’s clothes, found in the car, the existence of any other person in the car or at a distance, from which it was possible to carry out the shooting, was excluded,” the statement reads.

Born in 1964, Kitsmarishvili was one of a group of people who founded Rustavi 2 TV in 2004, and served as its director. In 2008, he was Georgia’s ambassador to Russia; and after the war in August 2008, he returned to Georgia and was among only a few politicians to criticize then President Saakashvili for his handling of the war. In 2011, Kitsmarishvili was involved in a dispute about control over the TV station Maestro.