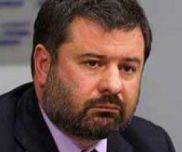 Erosi Kitsmarishvili was found dead in his car Tuesday. (Interpressnews.)

TBILISI, DFWatch–Former candidate for Rustavi mayor Erosi Kitsmarishvili was found dead in his car on Kipshidze Street in a prestigious district of Tbilisi.

The car was at an underground parking in the building where he was residing.

According to the Interior Ministry, a gun was found in his car.

The Prosecutor’s Office has launched an investigation into what appears to have been a suicide.

According to neighbors, a guard found Kitsmarishvili dead in the parking area. Criminal investigators are working on the spot.

People who were close to him, friends and journalists who spoke with him few hours before death,  claim that Kitsmarishili wouldn’t commit suicide and had clear plans for the future.

Georgian President Giorgi Margvelashvili called what happened a murder, expressing condolences to the family and relatives of Kitsmarishvili. He told journalists in Batumi that the case must be investigated soon.

“Naturally, all questions about this horrific murder must be answered.”

Justice Minister Thea Tsulukiani called on everyone to avoid speculations and wait for the results of the investigation.

Kitsmarishvili was born in 1964. Twenty years ago he founded the TV company Rustavi 2 in Rustavi. It continued broadcasting in Tbilisi and became the most watched of all Georgian TV station, a position it still holds today.

Politically, he used to a supporter of Mikheil Saakashvili’s National Movement and his TV company played an important role in the Rose Revolution in 2003, and functioned like a an informative locomotive for the revolution.

After Saakashvili and his party came to power, Kitsmarishvili had a falling out with deceased Prime Minister Zurab Zhvania and had to step aside from high levels of politics.

In 2004, he was president of Georgia’s trade-industry chamber. He was also the last Georgian ambassador to Russia. Georgia broke off diplomatic relations with Russia after the August war in 2008.

He then confronted Saakashvili’s government. Later he said that he didn’t have  political ambitions and planned to establish foundation which would have as aim to develop the media.

Kitsmarishvili never set up the foundation. In recent years, he was involved in a dispute about the ownership of the TV company Maestro, a conflict which is still unresolved today.

Even though he said he didn’t have political ambitions after being an ambassador, he participated in the local election in 2014 and tried to be elected mayor of Rustavi. In the second round he supported the National Movement candidate.