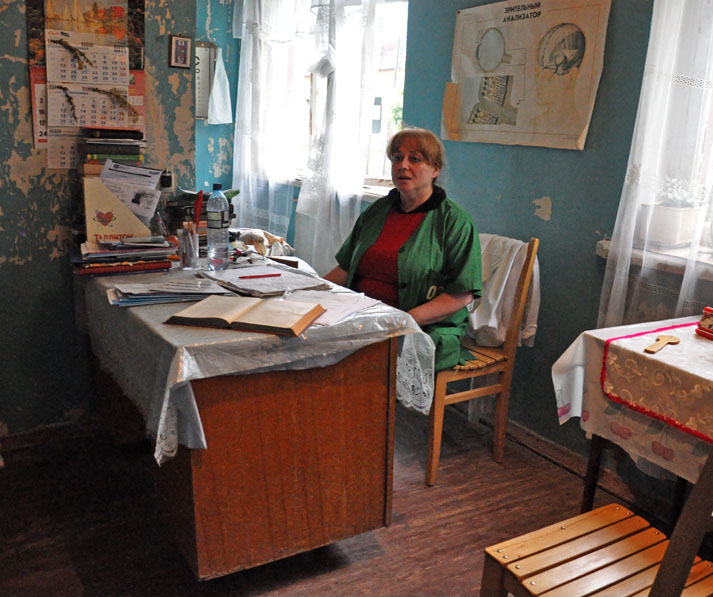 TBILISI, DFWatch–Medical personnel at the only hospital in Kharagauli haven’t received salary for the last four months, while the company which owns the management rights to the hospital is not fulfilling its obligations under the contract to rehabilitate the facility, which is almost falling apart.

There are about 40 employees in the hospital in Kharagauli, a borough in the western Imereti region, situated between high mountains. Only nine of them are doctors. The rest are nurses, assistants, accountants and others.

The chief physician at the hospital says that there is only one surgeon there, one gynecologist, and one pediatrician. There is an ultrasound machine in the hospital, but with no specialist. There is no cardiologist, no anesthesiologist, no dermatologist or endocrinologist.

Pediatrician Nani Arevadze says that the hospital is still equipped with old equipment from the Soviet Union.

“There was no place to sit here when I first came back in 1985. There were many doctors and patients,” she remembers. Now if there is an emergency, the hospital will call in crew from Zestaponi, a nearby town, and the patient is placed there.

“As for the sanitary conditions, no matter how hard and how careful we clean this place, there are such bad conditions that you will still think it is not safe and clean here,” the head doctor says.

Irina Bibichadze, eye doctor, tells us that she has more patients compared to others, but her cabinet is in a very bad condition. Everything is old. There are no cleaning personnel, so the doctors have to clean everything themselves. Her cabinet doesn’t have a water supply and she carries water in bottles.

The personnel at Kharagauli hospital protested about a week ago demanding to get paid their salaries. The hospital’s total liabilities to the personnel is 17 000 lari (USD 10 200).

In 2011, the government transferred the management rights of the hospital to a company from Israel – Aditti. Aditti is responsible for rehabilitating and equipping hospitals in eight regions of Georgia. Doctors claim they do not want high technology if it is not affordable, but at least clean and safe environment in the hospital to normally serve patients.

Aditti, which means ‘hope’, was given three months of probationary time to fulfill obligations, but this term ended in the end of April 2013. Nothing has changed.

“Representatives of Aditti visited us recently. They walked from one cabinet to another surprised how we serve patients in such conditions and left like this,” Nani Arevadze remembers.

Hospital employees think the best solution would be if the government took management rights away from Aditti and took responsibility for rehabilitating the hospital.

Akaki Machavariani, head of Kharagauli’s local municipality, told journalists of media-tour, which is organized by Civil Development Agency (CiDA), that for years the only hospital in Kharagauli used to be very successful and patients came here for treatment from nearby villages and regions.

“Now we can say that there is no hospital in the region,” he said, adding that last week they had a meeting in the Health Ministry and representatives of eight regions said they had the same problems with Aditti: no salaries, no equipment, no rehabilitation. The company hasn’t fulfilled 5 percent of the obligations it had taken.

In an interview with one a local newspaper, Health Minister Davit Sergenko said that Aditti is one of the most scandalous issues in the health care system in Georgia, and that the problem didn’t start when the new government came to power, but has lasted for years. The company was given a last chance to correct its mistakes, but the final term ended on June 29.

“The Georgian government will take all the steps defined by law and defined by the contract,” the minister explained. He also said that if the government suspends the contract with Aditti, it will handle the problems from then on.