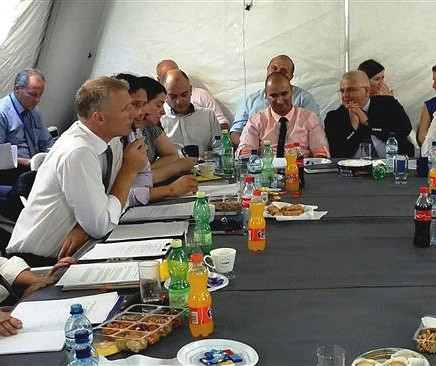 TBILISI, DFWatch–A Georgian citizen who was arrested for spying in the breakaway region South Ossetia has been set free after a meeting of the Incident Prevention and Response Mechanisms (IPRM) held on July 30 in Ergneti.

IPRM is a series of meetings between the warring parties from 2008, held primarily to discuss the everyday problems of people living in conflict zone, but also other issues.

Guram Gegelashvili was sentenced to ten years in jail in South Ossetia, but released because of deteriorating health. The Red Cross helped to bring him over to Georgia-controlled territory, where he was taken to a hospital in Tbilisi.

Another outcome of the IPRM meeting was new revelations about the former Georgian soldier Roman Shitikov, who was awarded a medal for his bravery in the Russia-Georgia war in 2008. After more than a year and a half without information about him, Georgia learned that Shitikov is currently in Russia, where he has refugee status. He was declared missing in November, 2013.

Negotiators as usual also talked about the installation of barbed wire and fences and the problems that causes for locals, as well as the problems with an irrigation system.

He said the irrigation system was one of the top issues at this meeting of IPRM. The de facto authorities said that two months ago, the water through the Tsinagarskuyu area of South Ossetia unexpectedly started flowing. Iriponsky canal was partly clogged, according to Gagloity, and was not ready for carrying irrigation water. After that, the South Ossetian side carried out maintenance work.

“At today’s meeting an agreement was reached on cooperation of the parties through a hotline to communicate their intention to start the water flow, suspend water supply and the level of such supply,” Gagloity said.

The next IPRM meeting will be held on September 23.