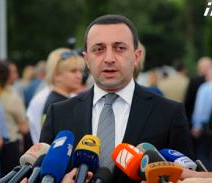 TBILISI, DFWatch–Georgia’s national currency is four cents away from reaching its lowest point ever against the US dollar.

When the lari began to drop rapidly in November, 2014, one USD was about 1.75 laris. Today, the Georgian National Bank’s official exchange rate is 2.4499 for one dollar.

After months of falling lari rate, the government and its opponents have traded barbs about the causes, blaming each other. Also financial experts and the international financial institutions like the IMF have chipped in.

National Bank President Giorgi Kadagidze said Monday that the lari rate now has reached the bottom and will stabilize in the near future – the word ‘stabilize’ in Georgian meaning that the currency will gain in value. He said the Bank is not expecting pressure, under current conditions, but if the pressure continues the NBG is ready to implement an ‘aggressive monetary policy’ and use all necessary instruments, including monetary intervention.

The government is ready to further adjust the budget if necessary, he added.

“All those measures gives us opportunity to assume that the lari soon will be more stable,” he told the television channel Rustavi 2.

Prime Minister Irakli Garibashvili said after a meeting with his finance minister, economy minister and secretary of the Economic Council that in a mid term perspective, the lari is going to become more stable, meaning increase in value.

The PM warned people against falling for ‘provocations’ and said that he has been cooperating with the Finance Ministry and the National Bank for the last few weeks and both are sure that the lari has reached its low point.

Garibashvili assured that the government is doing its best to solve the problem.

“It is important now to keep calm and not be emotional,” he said, calling on the parliament, the opposition, non-governmental organizations and analysts to avoid making irresponsible statements.

Earlier this year, the government proposed to sell public properties to boost the state’s coffers and the billionaire Bidzina Ivanishvili accused the National Bank president of not doing enough to prevent the lari’s depreciation.