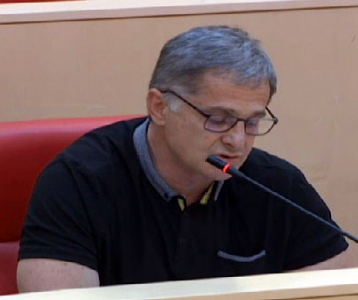 TBILISI, DFWatch–A conservative MP from the ruling Georgian Dream coalition wants to make changes to the anti-discrimination law passed by parliament last year which he himself voted for at every hearing.

Soso Jachvliani, an armwrestler, actor and film director, who has been a member of parliament since the 2012 election, submitted a draft bill which will mean removing the following words from the law: “sexual orientation, gender identity and expression.”

This would remove part of the first passage in the law, which describes the aim of eliminating all kinds of discrimination based on skin color, language, sex, citizenship, origins, as well as sexual orientation and gender identity.

Jachvliani, who voted for the anti-discrimination law in parliament at all three hearings, now wants it amended.

In a note explaining the bill, he writes that having those words in the law is a violation of ‘moral standards’ which is damaging to the moral standards of family and society.

The anti-discrimination law was passed in May, 2014. Before the vote, there was some resistance from religious radicals, who didn’t want to have sexual minorities mentioned in the law.

There have been many examples of intolerance toward sexual minorities in Georgia in recent years. On May 17, 2013, a group of around 30 people tried to hold a rally against homophobia, but were prevented by tens of thousands of activists cheered on by clerics. Several people were injured, including journalists.

Later, the Georgian Patriarch, who has enormous influence, announced May 17 as a day of family values and purity. In 2014, the day passed with no street rallies in support of sexual minorities.

This year was an improvement. At least three small street rallies were held in for protection of LGBT people.