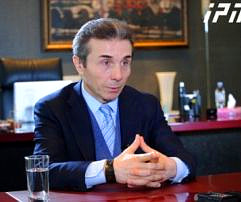 TBILISI, DFWatch–Businessman and retired politician Bidzina Ivanishvili has again blamed the National Bank for not helping to prevent a drop in the Georgian lari.

“I suspect that the National Bank is still acting inadequately,” he told journalists on Thursday.

The bank’s president was appointed during the previous government, while Ivanishvili is a backer of the coalition now in government.

The ex-PM accused the National Bank of acting ‘inadequately’ in the face of problems in the economy, and that some economic analysts agree with him, but he didn’t specify which ones he meant.

“There are serious questions,” he added.

A few months ago when the national currency lari dropped to a 14 year record low, Ivanishvili blamed it on the National Bank and its president Giorgi Kadagidze.

What he said was that Kadagidze is a former ‘government cadre’ and ‘his inaction and wrongdoing’ has caused the depreciation of lari.

Today, the billionaire investor said he doesn’t plan to teach the National Bank what to do, and that the appropriate bodies should determine how to find a way out.

“I will not and am not able to determine this from the outside.”

Ivanishvili is like a godfather to the Georgian Dream coalition, which he brought together in 2011 after many years of strong but uncoordinated opposition to Saakashvili.

After stepping down as prime minister in late 2013, declaring that he was leaving politics, the financier created his own non-governmental organization (NGO) called ‘Citizen,’ which has often been criticized by Georgian media for not doing anything, except criticizing the media. According to opinion polls, Georgians believe Ivanishvili has actually not left politics, but is on the contrary still calling the shots in the government, and government members often ask him openly for advice.

Acting Finance Minister Nodar Khaduri as usual expressed hope that ‘the situation will soon stabilize’ and National Bank and economic team of the government working on this.

The economy minister on his part called the record-low exchange rate a ‘slight change.’ Kvirikashvili assured that the national currency will improve ‘by every sort of logic.’