Georgia to sell off state properties to deal with currency crisis

Georgia to sell off state properties to deal with currency crisis 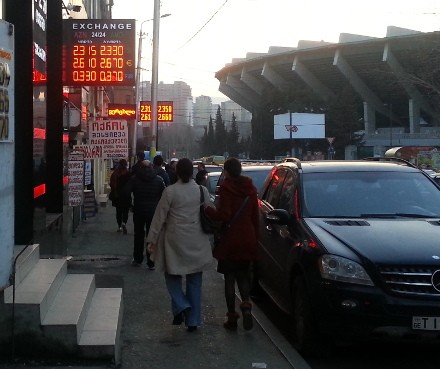 TBILISI, DFWatch–The government in Georgia has presented a list of state properties to be sold off to bring in new money, as a means to deal with an unexpected 30% drop in the value of the national currency, the lari.

Among the properties to be sold are the old National Bank building, the Ministry of Economy building, the Bobokvati residence, the Lottery Company and country houses, so-called dachas, on a hill above the capital.

Economy Minister Giorgi Kvirikashvili said after a meeting with business leaders that some of the attendants expressed interests in certain of the properties that are being sold, which to him seems like a prospect for real investments.

“Only from those objects we assume that we can mobilize about USD 300-350 million in two or three months,” Kvirikashvili said.

On the streets, as Georgians were desperately trying to get rid of their laris, exchange booths offered to buy them for prices ranging from 2.31 to 2.38 laris for one US dollar One euro is priced at between 2.67 and 2.70 lari in the street booths.

Unlike Azerbaijan, which deliberately depreciated its currency manat by 33.5% to strengthen its economy under pressure from falling oil prices, Georgia’s currency woes seems to have come unexpected for the government.

First, PM Garibashvili promised to “tighten the belt” and cut public spending 12%, and one of his ministers said this will be done without firing anyone and with no pay cuts for public employees.

Wednesday, after a meeting between the government’s economic team and business leaders about how to balance the currency and improve the situation in the medium term, ministers presented a list of state assets that are to be sold off, to bring in US dollars.

Later, the PM will present an action plan to deal with the currency problem.

The Georgian government is downgrading its 2015 economic growth outlook from 5 to 2 percent percent due to the crisis.

The government also plans legislative changes in regard to encouraging business and investments, a plan which the prime minister will speak about in few days.

After the meeting, participants told journalists that the government thinks the currency crisis will end by May and the endpoint will be a rate of one USD for two laris.

Finance Minister Nodar Khaduri said the government has short-term and long-term plans in several areas. One is to accelerate the privatization of state assets, another is to enhance Georgia’s standing as a tourist destination. The Finance Ministry also plans to revise the national budget.

“Infrastructure and investment projects won’t be reduced, neither will social expenses. We are working on serious tax incentives and this applies to stimulating constructions.”

The head of the National Bank, Giorgi Kadagidze, who also attended today’s meeting, said that said the lari will stabilize in the near future.

He explained that one of the fundamental factors for why the lari was depreciated is reduced currency flows. He said the lari is 30 percent lower in value today, but this hasn’t been reflected in the import yet. When it does, the import will be reduced.

“Reduced import means reduced demand for foreign currency and so the lari should stabilize in the near future.”

Kadagidze said the National Bank has enough reserves to ensure the country’s financial stability. He believes that in order to continue to stabilize the lari, it is necessary to improve ‘fundamental factors’ and increase currency flows into the country.

The head of the National Bank also met with leaders of twenty private Georgian banks, to discuss how to ease the pain for ordinary people who have bank loans in US dollars but receive their salary in lari. The banks promised to present a plan in one week.