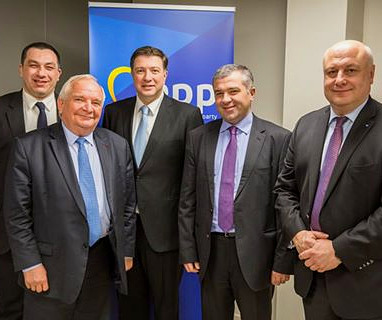 TBILISI, DFWatch–Georgia’s prime minister gave an EU politician a lesson in the separation of powers in democracies on Tuesday, explaining that a government cannot interfere in decisions made by the courts.

Giorgi Kvirikashvili, the head of government in the former Soviet republic of Georgia, was responding to a call by Joseph Daul, leader of the European People’s Party (EPP) to free all political prisoners.

“My thoughts go to the other political prisoners still detained in Georgia and I call on PM Giorgi Kvirikashvili for their immediate release,” the French conservative politician wrote on Facebook a few days ago.

Photos showed him standing next to some of the most well-known associates of former President Mikheil Saakashvili; among them, Gigi Ugulava, the former mayor of Tbilisi who was released from prison a couple of weeks prior after serving a sentence for corruption.

The Georgian government’s office answered Tuesday that it recognizes the importance of the suggestions from EPP’s president, but pointed out that justice in a democratic system is administered by the judiciary, not the executive branch or the prime minister.

“The Government of Georgia cannot engage in the process of releasing persons charged in the court with such crimes despite their political affiliation, and it cannot introduce impunity, which is also unacceptable in a democratic society. These are not the values of a Western, democratic and constitutional state. Georgian Government’s adherence to these values cannot be compromised in response to a politically motivated statement,” the statement reads.

EPP, the largest party faction in the EU parliament, has always stood by the UNM party, which came to power in the Rose Revolution in 2003 and used its then solid popular support to push through radical liberal reforms, but was resoundingly rejected by voters in 2012, in part due to a perceived problem with numerous political prisoners. But it was evident from Daul’s post that he believed that his newfound partners are the ones who are now victims of persecution.

Saakashvili left the country immediately after the end of his second term in November 2013, and is living in Ukraine, unable to return without facing arrest and criminal charges stemming from his actions as president. Also many of his companions during the near decade in power have either been put in prison or are living in exile with charges pending, as the new Georgian Dream government sought to clean up what they and the brunt of the population saw as government crimes under Saakashvili’s hard-handed rule.

Daul’s new friends are part of a faction within Saakashvili’s political party, UNM, who just recently broke out in a painful split about the role of Saakashvili, and formed a new party called European Georgia, representing those within the party who saw the former president’s long-distance interference as counterproductive and opted for a rebranding of the party. Saakashvili’s wife had previously signaled that the UNM has learnt from its mistakes and won’t repeat them, but voters rejected her in one of the party’s historic strongholds. On a national level, it got 27 percent of the votes.

Ugulava, the former mayor who was recently released after spending two and a half years in prison and is seen in the photo next to Daul, became a figure for those who wish to distance themselves from Saakashvili in the bitter internal feud last fall, which culminated in a party conference last weekend, where Saakashvili’s wing regained control of the party.