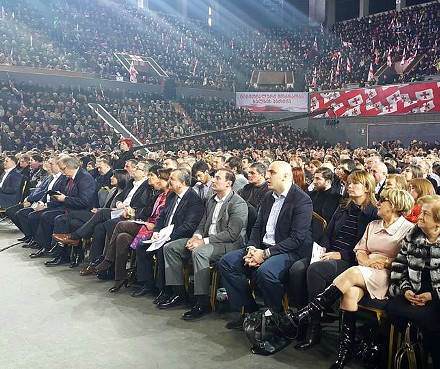 TBILISI, DFWatch–The pro-Saakashvili wing of the opposition National Movement party took control of the party on Friday at a high-profile convention that concluded a months long internal feud.

According to party officials, over 7,000 delegates took part in the event at Tbilisi Sports Hall.

The delegates elected a new ruling body consisting of people aligned with former President Mikheil Saakashvili, who is in exile in Ukraine and considers himself a political refugee.

UNM has until now been Georgia’s biggest opposition party, but lost many of its strongest spokespersons after a drawn-out internal feud about the role of former leader Saakashvili, who has kept away from Georgia where he would face criminal charges should he return.

Disapproval of Saakashvili came to the surface within UNM following the ex-president’s insistence on boycotting the new parliament due to alleged election fraud last October.

Nika Melia, a former candidate for Tbilisi mayor, was elected new head of the UNM political council. The outgoing council members showed their disobedience toward Saakashvili on key political issues.

The convention was greeted by the former president from Washington, DC, with his old ally and former head of Adjara autonomous republic Levan Varshalomidze.

“I want to congratulate all of you that Ivanishvili’s plan to turn the National Movement into ‘kotsis’ and putting us it into his pocket, has failed. This is his first failure since 2012 and, of course, not the last one,” Saakashvili said during his video address.

‘Kotsi’ is a derogatory term for members and supporters of Georgian Dream, a portmanteau of the name of the ruling party in the Georgian language: Kartuli Otsneba.

The speech by Saakashvili was a rebuke to party members who recently left UNM and formed a new opposition party called European Georgia, implicitly accusing them of having been bribed by billionaire Bidzina Ivanishvili, the former PM. This accusation is being firmly refuted by former party members.

All the speakers at the convention denied that it would cause any damage to the party that three quarters of its members of parliament and about half of the former political council members have quit.

The convention decided not to initiate a debate about the election of a new party chairman and secretary general. The former post is formally held by Saakashvili, while the latter is nominally occupied by Vano Merabishvili, who currently serves a prison term and is regarded by the party as a political prisoner.