Party which reformed Georgia during a decade breaks apart

Party which reformed Georgia during a decade breaks apart 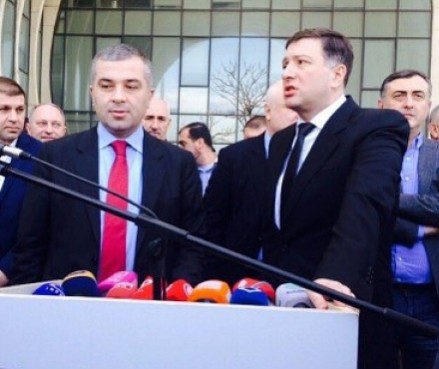 38 heads of municipal and regional organizations and 21 MPs and part of the political board are quitting as UNM members. The breakout faction includes about half of the UNM leadership and most of its members of parliament.

Only 5 MPs have decided to remain in the party. One MP, Azer Suleymanov, has not decided whether he will remain within the UNM or join the new party.

At a special briefing Thursday, former Former Tbilisi Mayor Gigi Ugulava harshly criticized his former ally and party leader Mikheil Saakashvili, who left Georgia immediately after stepping down as president in 2013 and has remained a source of friction within UNM from his exile in Ukraine.

Ugulava, who his released from prison a few days prior, said he had done everything in his power to keep the party together since his release, but to no avail.

The former mayor served more than a year for abuse of official powers and quickly became the informal leader of the group which strives to distance itself from Saakashvili, a position he reiterated by blaming Saakashvili for the UNM’s disintegration.

“Saakashvili is the past. He is a problem for himself, not the country or the party,” Ugulava said at the briefing.

Ugulava compared Saakashvili, once his close ally, to a wrecked car, which is not useful anymore.

“Us politicians are like vehicles who serve the society, the people. Once the car has stopped working it becomes useless, but if you love it, you keep it as an antique, souvenir, and use it in the weekends to drive your family. If it is still bothering you, then another decision can be made. The vehicle can be thrown in a garbage,” Ugulava said.

Followed the briefing, Saakashvili responded in a statement posted on Facebook that ‘his people’ showed him support and didn’t let the Georgian tycoon and former prime minister, his personal rival Bidzina Ivanishvili make his plan into reality. He announced that the time for the loser to rule has passed.

“I feel sympathy with Ugulava as a human, because he talked about me more than about oligarch Ivanishvili, who personally put him behind bars.  Everyone saw the number of traitors, everyone will witness the power and scale of the UNM supporters at the party’s convention in January 20,” the post reads.

Some of the party’s most influential members, including former National Security Council head Giga Bokeria, would support Davit Bakradze, who headed the UNM faction in the outgoing parliament, as a chairman of the new party. The new party has tentatively been named European Georgia.

The infighting within the United National Movement became public after former President Saakashvili encouraged members of the party not to serve in parliament and not to participate in the runoff of the parliamentary elections in 2016, but some party members disagreed with such a strategy.  The feud continued with disagreement over the date and format of the upcoming party convention. Saakashvili’s supporters won that vote, as it was decided to hold a congress with 7,000 delegates on January 20.