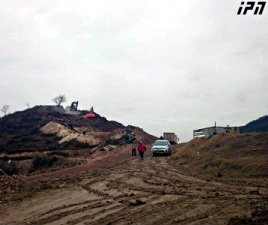 TBILISI, DFWatch–The influential Georgian patriarch on Sunday criticized a company which is excavating an ancient mine in the southern part of the country, and called on the government to intervene.

Mining company RMG Gold on Saturday resumed work at Sakdrisi, an ancient gold mine where archeologists say there are more than 5,400 year old human traces.

This caused the revival of a campaign to restore the mine’s status as cultural heritage site. They say that blasts carried out by the workers have now completely destroyed the historic part of the mine and almost no traces are left of it. Some even say there is no point to protest anymore as there is nothing left to protect.

Patriarch Ilia II said during a prayer at Sameba Cathedral that the Georgian church condemns the destruction and the people who did it and wants the government to punish them.

He said according to scientists this was the most ancient gold mine in Georgia. He also asked the government to investigate who exactly is responsible of destroying it.

Later on Sunday, the administration of the Georgian Church issued a statement condemning the destruction of the Sakdrisi mine. The statement says it is not clear why the Culture Ministry could have given permission to destroy Sakdrisi.

Minister of Culture, Mikheil Giorgadze in the evening said on Imedi TV that the ministry takes the responsibility for Sakdrisi and he plans to introduce details about the issue to the patriarch, as he respects his opinion and wants to explain why he issued the decree which lifted the protected status. He said the decision was made in compliance with law.

The ministry has discussed the Sakdrisi issue with the National Museum’s scientific council.

Archil Kbilashvili, former Chief Prosecutor in the Georgian Dream government and now legal consultant for RMG Gold, said at a press conference on Sunday that the company never violated any law. The legislation allows removing or collapsing archeological sites after agreement with the Culture Ministry or the Cultural Heritage Protection Agency, he claimed.

He further claimed that if the site has been fully excavated and researched and there is not enough basis to grant status as heritage to the monument, it may be destroyed.

Kbilashvili said both conditions were satisfied, as the Georgian-German expedition reports and document from Georgian National Museum indicated that the site was almost entirely researched and excavated and the other part was impossible to dig up due to safety measures.