One more Georgian ex-official proposed for post in Ukraine

One more Georgian ex-official proposed for post in Ukraine 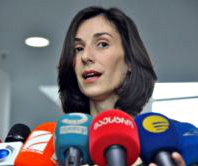 If appointed, Eka Zghuladze will work on reforming the Ukrainian police. (Interpressnews.)

TBILISI, DFWatch–One more former official from Mikheil Saakashvili’s government has been granted Ukrainian citizenship after being proposed for a high post in the new Ukrainian government.

Eka Zghuladze, a former deputy interior minister in Georgia, is now candidate for the same position in Ukraine.

“I as president hope on you. I hope your unique role in government will help us transform the Interior Ministry from a Soviet system to European system,” the president said, adding that he also hopes after the reforms Ukrainian police will stop accepting bribes, which was what happened in Georgia.

Police reform was one of the reforms which made Mikheil Saakashvili’s government popular shortly after the Rose Revolution of 2003. To get rid of the corruption, everyone in the police was fired and entirely new personnel brought in and sent through training. The reform succeeded in rooting out the rampant corruption within the police and changed the reputation of the force.

Avakov said after granting citizenship to Zghuladze, the last formality will be left to officially present her for the post as deputy interior minister.

“I’m delighted that there will be more competence, desire for reforms and smiles at the Interior Minister,” he added.

Zghuladze is not the only one from the previous Georgian government who is brought into the Ukrainian government. Former Health Minister Alexandre Kvitashvili, who also was rector of Tbilisi State University, was December 2 appointed as new health minister in Ukraine.

The appointment of Kvitashvili enraged Georgian officials and led to a debate about the performance of the Georgian ambassador to Ukraine.