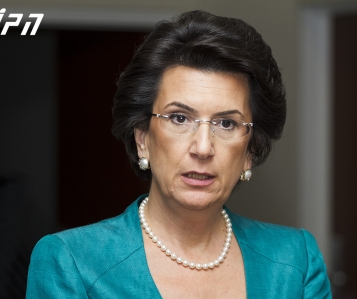 Nino Burjanadze, leader of Democratic Movement, is one of the signatories of the statement. (Interpressnews.)

TBILISI, DFWatch–Political parties not represented in parliament accuse the government of making one-sided decisions in relation to the Election Code.

The opposition parties accuse the governing Georgian Dream coalition of anti-democratic actions when it last week amended the Election Code.

The bill, which is already approved, includes several issues, and even though the cross-faction group worked on preparing it, not a single sentence was in the first draft, according to representatives of a handful of smaller parties that are not in parliament.

The parties have protested against what happened, and the parliament speaker said that their objections will be taken into account during further parliamentary discussion of this bill.

In the end, only the lower threshold for local elections was changed, after Prime Minister Irakli Gharibashvili initiated it. According to the bill, the mayors of 12 cities must be elected with 40% threshold. The gamgebelis (top local officials) of 66 municipalities must pass a 33% threshold. The National Movement demanded that in both case the threshold should be 50%, and the government was against, since Gharibashvili has not initiated it.

As for the other issues which parliament has passed and opposition is protesting, concerns several directions:

In the joint statement published on Monday, the non-parliamentary parties say that the single-mandate majoritarian districts will remain with unequal number of voters, which grants opportunity to government to gain more mandates that votes they receive.

The voters’ list also remains unchanged. According to the statement, Georgian Dream refused to introduce biometric data to identify voters, but also didn’t accept any alternative proposals from the opposition.

It continues saying that the ruling party has ‘unprecedented monopoly’ in the election administration: 12 out of 13 representatives in the commission are from Georgian Dream, and the last one is from the National Movement.

“The only thing which the opposition has achieved as a result of a long fight is establishing 50 percent threshold for mayors and gamgebelis, but Georgian Dream made it pointless with the amendment, according to which the City Council is granted the right to dismiss an elected mayor,” the letter reads. “By the way, this procedure is completely different from impeachment, because the council is able to dismiss the mayor not for legal violations, but also for political views.”

The parties believe that there are no conditions for free and democratic election in Georgia, which they see as a ‘serious interruption’ of Georgia’s integration with NATO and the European Union.

“We call on the government to continue a real dialogue with the opposition instead of a formal one,” the statement reads.

“We call on the international community to give an objective evaluation of the Georgian government’s anti-democratic actions,” a handful of parties not represented in parliament write in a new statement.