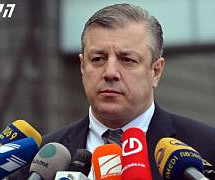 Economy Minister Giorgi Kvirikashvili believes the situation will improve in the near future. (Interpressnews.)

TBILISI, DFWatch–As the Georgian lari reached a new record low, the Georgian government’s “economy team” gathered to come up with a plan to save the country’s economy.

The US dollar is valued at 2.1771 laris in the most recent figures from the National Bank – the lowest level in twelve years.

The weakened lari rate was discussed at the Economy Ministry, at a meeting attended by the finance minister, the minister of infrastructure and regional development, the mayor of Tbilisi and others.

Economy Minister Giorgi Kvirikashvili said after Friday’s meeting that they discussed budget issues and what measures to take to encourage new investments and business.

“The situation is not simple. Many components need to be fulfilled to improve the situation,” he said. “We believe that the situation will quite simply improve in the near future.”

Finance Minister Nodar Khaduri said they prepared plans for how to improve the situation, but he didn’t go into details. 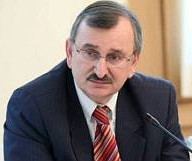 Former president of the National Bank Roman Gotsiridze told DF Watch that the lari’s falling value is a result of the government’s incorrect economic policy, but is also influenced by external factors.

He says that over the last two years, the lari has been slowly inching downward, a development which first became apparent in December, 2013, when the National Bank was forced to sell USD 470 million to sustain it. But the government was unable to see the end of the situation back then, and eventually the lari continued its fall.

“This was an intervention in the economy of the government, for propaganda purposes. Investing money in social and so-called business-encouraging fields, which was followed by the introduction of new regulations,” he explained to DF Watch.

Gotsiridze says the government’s policy, and the country’s performance, were worsened by external factors. The national budget had lots of added social expenses, agricultural loans, and healthcare projects.

“The budget itself became a contributing factor to the crisis, the economic configuration changed, the economy lost stability due to external shocks due to regulations. However, it would be wrong to say that there are no external factors. Of course there are.”

The most ‘painful’ was reduced money transfers. Gotsiridze thinks that measures need to be taken in order to reduce budget expenditure by at least by 300 million laris, which will lower the economic growth prognosis to 3 percent of less. Otherwise, the lari will continue to drop and prices will increase, which will be a blow to the country’s economy.

According to the National Bank, the amount of money transfers into Georgia in January was USD 75.5 million. This is 23.3 percent less than in the same period in 2014.

The last time the lari was that low in value was in was in December, 2003, when the exchange rate was 2.1800 against one dollar.

Lari became Georgia’s national currency in October, 1995, with a starting rate of 1.3 lari for one USD. The first time the rate against USD broke through the two lari mark was in December 1998, when it reached 2.15. The lowest level the lari has ever been was 2.4510 in February 1999.