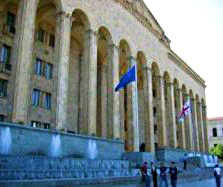 Activists plan to gather outside the old parliament building in Tbilisi. (Interpressnews.)

The flash mob will last half hour and the purpose is to mark the International Day Against Homophobia, which is marked in many countries worldwide.

Local organizations inform that the rally aims at getting attention to the problem of homophobia in the country.

A flash mob is a sudden gathering of people who perform a seemingly pointless act for a brief time in a public space, only to quickly disperse.

Participants will gather at parliament building at 13:00 and will express silent protest against discrimination of sexual minorities for half an hour.

“May 17, people who may also not work for rights of LGBT, but they separate from hate speech and crimes motived by hatred,’ organizers say, adding that anyone who supports equality can participate in the rally.

Tbilisi City Hall and Interior Ministry will be informed about details of the rally, while organizers call for participants not to get in discussion with strangers and do not bring sharp or fragile objects.

Gay rights rallies in Tbilisi have in the past often ended in violence with participants fighting against radical religious groups. Organizers say that is the reason diplomats from European embassies will be present and observe the May 17 rally.