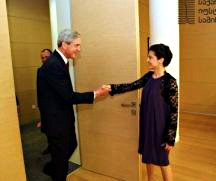 TBILISI, DFWatch–Robert Mueller, director of the US federal police FBI, has paid a visit to Georgia in connection with the Olympic winter games in Sochi in 2014.

This is Mueller’s second visit to Georgia. The first time was in May, 2010, when he discussed deepening relations between the US and Georgia with then Minister of Internal Affairs Vano Merabishvili and Minister of Justice Zurab Adeishvili; two former strongmen in President Saakashvili’s government who have come under criticism by the current government. The former is accused of training and equipping Chechen rebels and the latter of organizing torture of prisoners.

Today, US Ambassador to Georgia Richard Norland told journalists that Mueller’s visit is related to the upcoming Sochi Olympics. He said the FBI is providing protection for Americans from terrorist threats, and this is why Mueller is holding consultations in the region related to the Olympics.

Norland also said the FBI director has met with Prime Minister Bidzina Ivanishvili, the minister of justice and the deputy interior minister.

His meeting with the prime minister dealt with issues within the strategic partnership, a framework for US-Georgia cooperation established in January 2009. The PM said the new government will do its best so that the US’ interest in Georgia increases.