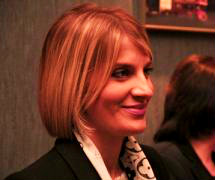 Natia Mogeladze has not commented on why she resigned as head of the body that monitors the financing of political parties. (Interpressnews.)

According to the State Audit Office, a body subordinate to the Financial Monitoring Service, it was Mogeladze’s own decision to resign.

The Financial Monitoring Service for political parties was created on January 4, 2012, with Mogeladze as chair.

Her name has come to be associated with a number of interventions against current Prime Minister Bidzina Ivanishvili’s Georgian Dream coalition during the election campaign last year, when the monitoring service fined Ivanishvili and members of his coalition with hundreds of millions worth of fines.

After Ivanishvili went into politics, President Saakashvili’s government prepared a set of new legislative regulations which gave an opportunity to fine any party and any of its members for many types of financial transactions.

The Monitoring Service almost exclusively requested the court to fine members of Ivanishvili’s political bloc, and the court usually agreed.

Before coming to her latest job, Mogeladze worked at the Prosecutor’s Office where she is thought to have been close to Zurab Adeishvili, the former justice minister who left the country after the National Movement’s election defeat last year and is now charged in absentia with organizing torture of prisoners.

A few days ago her name was heard in a scandal which broke last week, when a secret video recording was posted on the Internet which showed sex between three persons. The publication of the video is widely perceived as a gross intrusion on privacy, and the case is under investigation.

One of the persons shown in the video claims that it is a fabrication and was posted only because he is in possession of compromising material about certain officials in the Ivanishvili’s government, among them the prime minister’s advisor Gia Khukhashvili, the deputy interior minister and the deputy chief prosecutor.

He further claimed that these three were involved in various business ventures together with Natia Mogeladze and her husband.

Khukhashvili denied this and said that he doesn’t know Mogeladze personally. Mogeladze said the same. She hasn’t commented on her resignation.