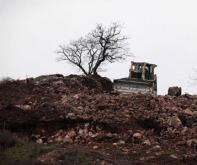 Sakdrisi gold mine. Much of the foreign investments go into mining. (Interpressnews.)

TBILISI, DFWatch–There was 34 percent less direct foreign investment in Georgia in the first quarter of 2015 than in the same period last year.

The most important originator countries for investments in the first quarter of 2015 were Azerbaijan with USD 59 million, Turkey with USD 27 million and Russia with USD 23 million.

Among the sectors being invested in, the most significant were transport and communication, construction, mining industry, hotels and restaurants and the energy sector.

Precise figures will be published on August 17.